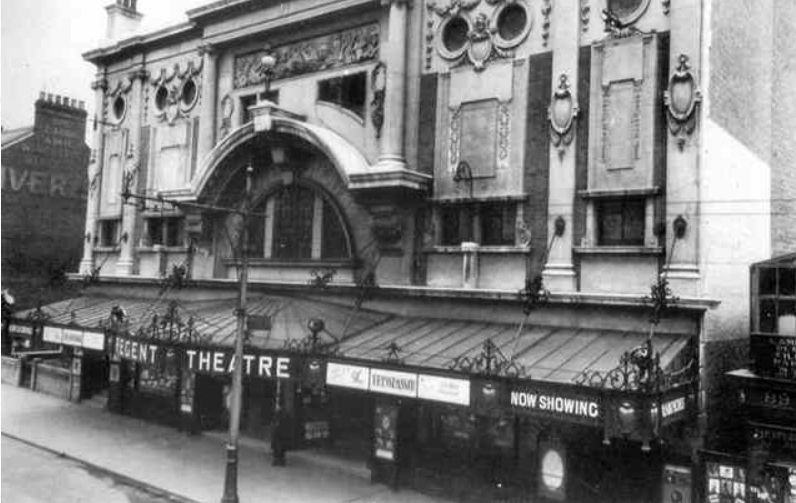 Cinema. 1914. By Francis Burdett Ward. For cinema magnate FH
Cooper. Now a bingo hall and amusement arcade. Rendered,
colourwashed and stuccoed brick and some artificial stone
decoration. Roof not visible.
EXTERIOR: 2-3 storeys; 6-window range. Facade with a wide
central bay surmounted by a Diocletian window. To the right is
a late C20 amusement arcade, to the left a tea rooms, the
latter original but externally altered. Upper 2 floors
articulated by a pair of giant columns with Ionic capitals
standing on paired console brackets in the centre and 2
progressively narrower bays right and left separated by giant
Ionic pilasters on bases. Between the columns are four 2-light
casements below a frieze of artificial stone by Crotch & Son
(of Norwich) depicting Comedy, Tragedy, owls, baskets of
fruit, lyres and other theatrical impedimenta. The side bays
have again paired 2-light casements, this time at a lower
level and below stuccoed panels. Above are one oculi to the
narrow outer bays and 2 oculi to the wider inner bays, all
under artificial stone garlands. Crowning entablature to the
composition now lost.
INTERIOR: central marble steps lead to foyer. Inverted
Imperial stairs with late C20 handrails. Rococo-style
plasterwork in profusion, tending more to the Baroque in the
coffered ceiling of the tea rooms. In the tea room also are
depicted friezes of cherubs dragging swags and garlands. The
auditorium has thin cast-iron columns supporting a wavy
wall-plate under the 3 principal boxes right and left. A wide
segmental arch supports the main balcony. At intervals gilt
putti playing pan-pipes and trumpets are depicted in relief.
Above the boxes are 5 basket arches on columns, and above
these are oculi decorated and linked with garlands. Proscenium
arch to the stage remains as do dressing rooms.