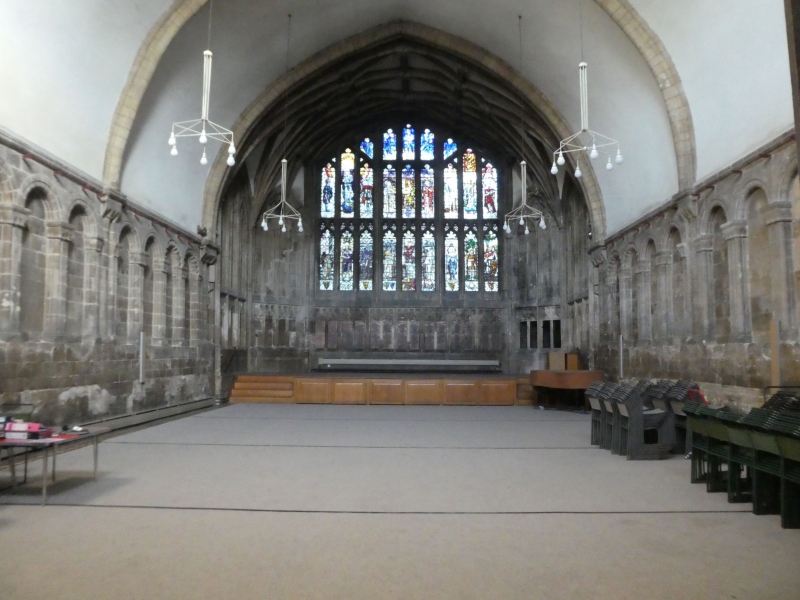 The chapter house of the former Benedictine Priory of St
Peter, now the chapter house of the Cathedral Church of the
Holy and Indivisible Trinity (qv). c1100, largely rebuilt late
C12, and altered c1380. Ashlar, stone slate roof with coped
gables.
PLAN: a large chamber on the east side of the Cathedral
Cloister (qv) between the Treasury and the Cathedral Library
(qv) to the south, and the site of the former dormitory of the
abbey to the north; three C12 bays originally with an apsidal
east end, the apse replaced in the C15 by a fourth bay with
canted sides; the entrance at the west end from the east alley
of the cloister remodelled in C15; projecting into the
north-west corner the stair to the library; remains of stair
to dorter on north side.
EXTERIOR: above the roof of the east alley of the cathedral
cloister the west gable-end wall with a C12 window of three
large, stepped, semi-circular arched lights slightly recessed
below a segmental relieving arch, nook shafts with cushion
capitals to the jambs and mullions and moulded arches with
chevron enrichment to the arch of the central light; in the
east gable-end wall a large nine-light window with
Perpendicular tracery panels, a central transom and foiled
arched heads to the lights below and above the transom. At the
north-east corner the stub of the south wall of the former
adjoining monastic dormitory with the moulded jamb of a window
decorated with ball flower.
INTERIOR: above a continuous, high ashlar plinth the three C12
bays are defined by wall shafts with scalloped capitals and
transverse ribs to the pointed barrel vault with a pair of
shafts and ribs at the east end of the east bay; between the
wall shafts in each bay a tall dado of three bays of blank
arcading capped by a string course, the two eastern arches of
the arcading in the east bay on each side have chevron
moulding; the C15 canted east bay is faced with Perpendicular
arched panels similar to or extending the pattern of panels in
the east window, wall shafts at the corners of the bay support

an elaborate lierne vault with carved bosses. The east bay had
to be canted outwards so that the NE and SE corners of the
east elevation were supported on the Romanesque crypt walls
below, the C14 east window replacing the C12 apse. Evidence of
early Romanesque pier left visible in the second pier from the
NE corner at Tribune level.
(Welander D: The History, Art and Architecture of Gloucester
Cathedral: Stroud, Gloucestershire: 1991-; VCH: The City of
Gloucester: Oxford: 1988-: 227; BOE: Verey D: Gloucestershire:
The Vale and the Forest of Dean: London: 1976-: 221).