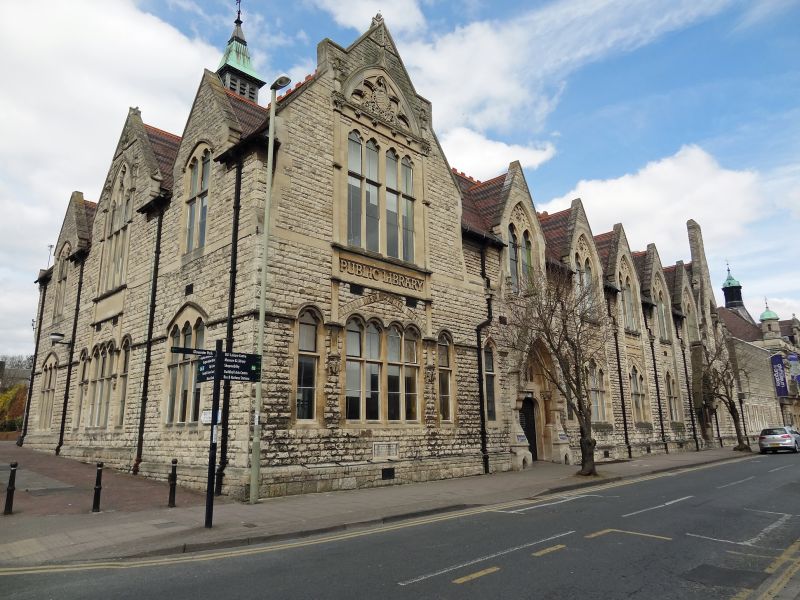 Schools of Science and Art and a museum, now a public library.
1872, by Fulljames, Waller and Son for the Gloucester Science
and Art Society and funded mainly by subscribers; converted
and extended to the south as public library, 1897-1900, by FW
Waller and Son for the Corporation of the City of Gloucester.
MATERIALS: squared rock-faced rubble in courses with ashlar
features and details, coped gables with kneelers, red tile
roof with decorative courses and an upper zone of diaper in
blue tiles, gabled dormers, stone stacks.
STYLE: C13 Gothic, inspired by the work of GE Street.
PLAN: a double-depth range of five bays parallel with street,
with a cross-gabled, right-angle range at each end; at the
right hand end the right-angle range and two bays to the left
are the earlier building.
EXTERIOR: two storeys and cellars, chamfered offset plinth; on
the front to right the original entrance doorway in the bay to
left of the north cross-gabled range: above the doorway an
arched canopy within an applied gable supported on corbels,
the archivolt of the arch decorated with blind foils; the
doorway, framed by nook shafts with foliated capitals and a
moulded arch, has a Caernarvon-arched lintel and a foiled
window in the tympanum; in the wider bay to right of the south
cross-gabled range a similar doorway with arcading framed by
miniature buttresses recessed on each side of the upper part
of the canopy gable, and on either side a single-light window
with a transom and trefoiled head.
In each of the three bays between the doorways a slight,
full-height recess; each recess on the ground-floor frames a
three-light arched window with a transom and with trefoiled
heads to the upper lights, and on the first floor, including
the two doorway bays, a two-light arched window rising into a
dormer gable with a shaft applied to the central mullion and
trefoiled heads to the lights, and with a blind, circular,
foiled recess with a carved central boss in the tympanum of
the window arch.
The gable of the front gable wall to the right-hand cross

range has convex curves reflecting the curved roof with
skylights over the range; weathered offsets on either side of
the upper part of the gable wall rise in steps to the base of
a tall gable-end stack; on the ground floor two, two-light,
trefoil arched windows each with a transom, a quatrefoil light
in the head of the arch, and a hoodmould; at first-floor level
a central, corbelled statue niche with flanking shafts and a
projecting gablet to the hood.
The front gable wall to the left-hand cross range has a
central four-light window, the lights of the same height with
transom and trefoiled heads, below a relieving arch; on each
side a similar-single light window; at first-floor level a
panel inscribed "PUBLIC LIBRARY" forms the apron for a tall
four-light window with transom and trefoiled heads to the
lights; the frame of the window is crowned by a blind,
cinquefoiled arch enclosing an armorial shield. The south end
elevation is similar to the central bays of the front.
In the centre of the ridge of the roof of the south range a
timber fleche with copper spire, probably the fleche
originally placed above the roof ridge over the entrance bay
at the north end for which the seating remains.
INTERIOR: the most notable feature is the 'quasi-hammerbeam'
arrangment in the main reading room which is braced out in
order to support glazed 'atrium' roof; composite roof with
wrought-iron tension bracing to upper floor reference library.
(BOE: Verey D: Gloucestershire: The Vale and the Forest of
Dean: London: 1976-: 240; VCH: The City of Gloucester: Oxford:
1988-: 214, 233; The Builder: June 17, 1871: London: 467).