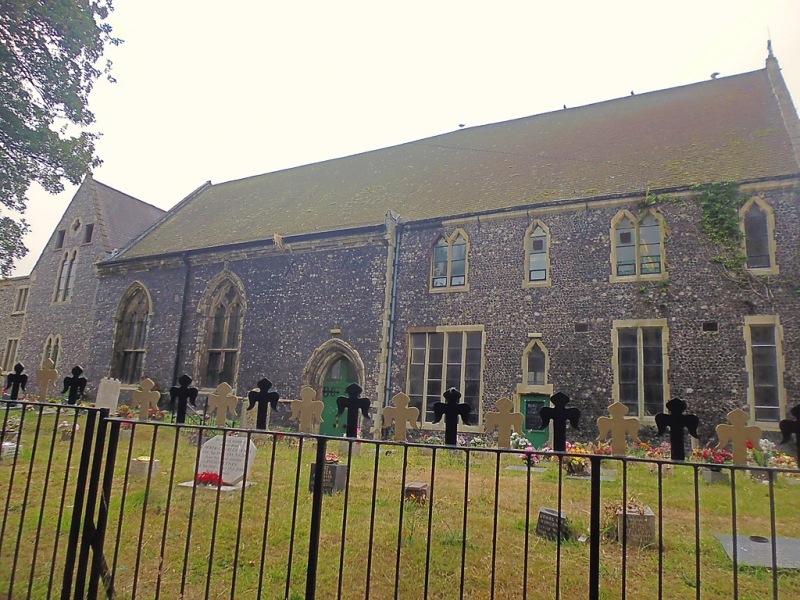 The Great Hall of the domestic range of a Benedictine Priory
founded 1101 by Bishop Herbert de Losinga. Much enlarged 1260
and the hall itself rebuilt c1300. Restored and with additions
1853 by JH Hakewill. Extended to east 1947. Knapped flint with
ashlar dressings under machine-tiled roofs.
EXTERIOR: the hall is in the north range: single storey; 2
reticulated 2-light windows north and south; to the west are
moulded and arched opposing doorways relating to a former
screens passage. The south side has stepped buttresses, both
sides have a worn ashlar cornice with remains of carved heads.
Gabled roof. Extending south from the east end is a music room
of 1853. Knapped flint with ashlar dressings as before. One
storey, rising to 2 storeys at north. 2-storey entrance porch
left of centre with double doors to the ground and a 2-light
reticulated window above. To its right are two 2-light cusped
windows under depressed arches and the south gable has a
3-light window with a vesica. To the left of the porch is an
arched doorway and one paired lancet to each floor. The north
gable is lit through paired trefoiled lancets to each floor
and an encircled quatrefoil in the apex of the gable.
Extending south from the west end of the hall is a former
museum, late C19: square plan, 2 storeys, flint ground floor
and half-timbered upper floor reached via a steel staircase;
pyramid roof. Abutting the west gable of the hall is a
2-storey extension of 1853 in 4 bays. Single and grouped
square-headed lancets to the ground floor of the north face,
single and paired arched lancets above. 4-light reticulated
west window.
INTERIOR: the hall is open to the roof and is entered from the
music room through a multiply-moulded arched doorway with a
square hood-mould with shields in the spandrels. Above are 2
C19 windows. The west end retains 5 screens passage doorways,
all with multiple mouldings, all arched and all except the
centre one with short ogee arches rising to a string course.
The rear of these arches are stilted. The roof is of 1853:
principals, 2 tiers of purlins with arched windbraces and
collars.