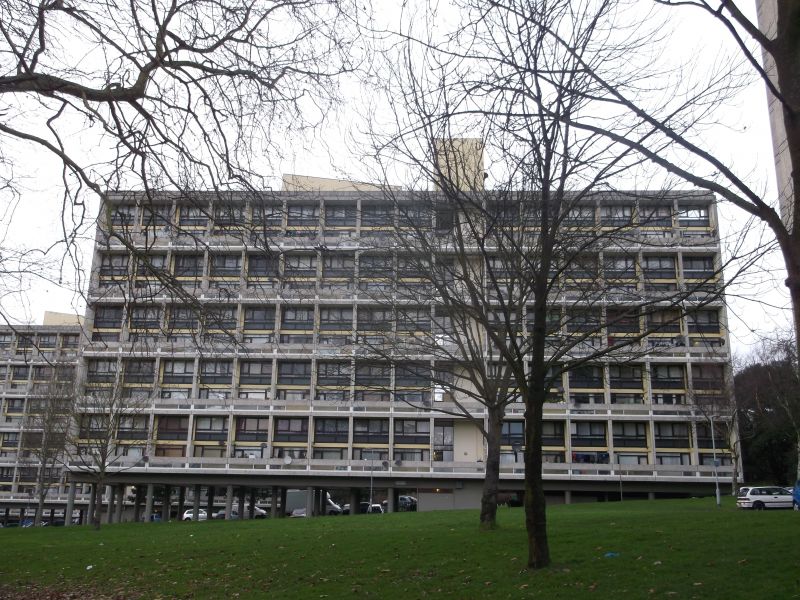 Block of 75 maisonettes. Designed 1952-3; built 1955-8 by the London County Council's Architect's Department, Colin Lucas Architect in Charge, J A Partridge, W G Howell, J A W Killick, S G Amis, J R Galley and R Stout job architects. W V Zinn and Partners, engineers. Reinforced concrete in-situ frame of board-marked concrete now painted, with storey-height prefabricated concrete with Dorset shingle and Derbyshire spar exposed aggregate; flat roof.
The plan consists of five tiers each of fifteen maisonettes, each a 12' bay, raised on alternating lines of two and three piloti at bay intervals along the ground floor. The nine bays south of the lift shaft left open. Top of lift shaft and services expressed on roof as geometric shapes. Double-height lift landings, paved. Each maisonette has private balcony facing east, and gallery access from west; the upper three tiers of flats additionally with steel emergency access balconies at bedroom level. Timber windows (original) with opening casements and flush timber doors. Each maisonette with kitchen and living room on lower level, two bedrooms and internal, mechanical ventilated bathroom and toilet (a new departure in maisonette planning) on upper level; internal fittings not of special interest.
Ramp of board-marked concrete in front of lifts incorporates Corbusian-style drip mould, much imitated in the most progressive architecture of the time.
Chimney abutting to north of board-marked concrete in elegant funnel form, concealed behind Winchfield House but forming a distinctive incident in the line of slabs seen from Highcliffe Drive. It serves district heating system for the slabs, the first installed by the LCC in any development, and is linked underground to the boiler house, which is not in itself of listable quality.
The slab blocks devised by this team are inspired by Le Corbusier's Unite d'Habitation in Marseilles, which Howell and others had visited in 1951. The proportions are based on his 'Modulor' and the Fibonacci number sequence.
The expression of each maisonette as an individual element in the facade marked a new rigour and sophistication in the LCC's pioneering slab design. The placing of the slabs into the side of the hill, a revision made in 1953, is a powerful and skillful response to their landscape setting in Downshire Field, an C18 landscape much remodelled and enhanced by the team; the steep slope gave purpose to the pilotis. The relationship of the blocks to each other and the landscape is a 'majestic' piece of townplanning (Ian Nairn). They are the centrepiece of the Alton West estate, the LCC's most ambitious post-war development scheme and considered 'probably the finest low-cost housing development in the world' (G E Kidder Smith). With its chimney and prominent position, Winchfield House is the most idiosyncratic and most photographed of the group.