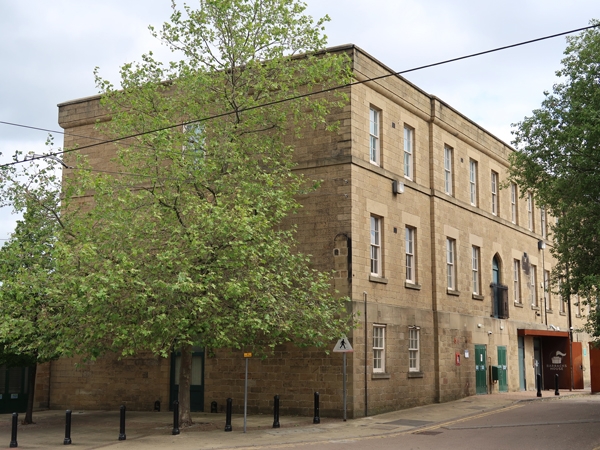 Barrack hospital, now flats, and attached area railing. 1848-54, with early C20 additions, used as industrial workshops mid C20, converted 1990. Coursed squared stone with ashlar dressings and hipped slate roofs. EXTERIOR: Plinth, first floor band, half-round eaves, coped parapets. 2 storeys plus basement; 16 window range. Windows are glazing bar sashes. Recessed centre has 2 windows on each floor. On either side, slightly projecting blocks, 5 windows, and below, central pointed arched double doors with steps, keystones and fanlights, flanked by 2 windows. Left block has the 2 windows to the left of the door replaced by a mid C20 sliding garage door. Outer bays have 2 windows on each floor. Basement has 9-pane sashes divided by cross walls. At the rear, two 3-storey projections flanked by external stairs, and linked by a cast-iron gallery and verandah with early C20 additions. Trefoil-pierced crest linking the tops of the cast-iron posts. INTERIOR: Not inspected. SUBSIDIARY FEA TURES: Outside, cast-iron spearhead area railing. HISTORY : Hillsborough was built in response to anxiety over civil unrest. Planned according to reformed ideas preceeding the Crimean War, and one of the first barracks to use a historicist, castellated style following those at the Tower of London (1845). Despite conversion, much of the original site survives, including officers' quarters, barracks, stables and riding school, magazine and guard house (qqv). (The Buildings of England: Pevsner N: Yorkshire: The West Riding: London.: 1967-: 472; Skeleton record plan of ground floor: 1907-1923).