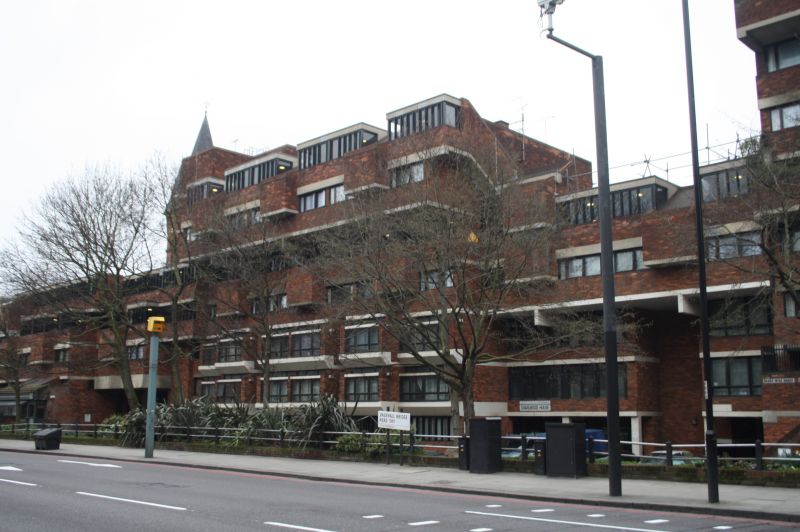 L-shaped complex of old peoples' hostel with flats over and behind, with sunken residents' community hall, boiler house and one industrial unit (No. 45 Vauxhall Bridge Road). Design won in competition 1961 by John Darbourne, this block detailed and built 1964-8 by Darbourne and Darke for Westminster City Council. In-situ reinforced concrete beams and floors, exposed on the elevations and projecting balconies, and load-bearing brick crosswalls. Elevations of multi-red hand-made facing bricks, with raked joints. Flat felted roof. Charlwood and Morgan Houses lie at the centre of the first phase of Lillington Gardens and have a particularly complex plan. The two blocks are linked by three-storey hostel for eighty people, with ground floor community facilities and two floors of bedsits grouped round shared living area and bathroom facilities, and forty self-contained flatlets. Above this, Charlwood House has four floors of one-bedroom single-aspect flats and bedsits, 49 in all, reached via narrow access galleries overlooking Vauxhall Bridge Road on third, fourth and sixth floors and by two broad, paved open walkways linking semi-private patio areas on third and fifth floors. The access galleries incorporate some planting boxes, but are distinctive within Lillington Gardens for being partially infilled with glazed screens. On Vauxhall Bridge Road elevation (at left) is builders' office and store, with ground-floor garage and offices over. Behind hostel is the community hall, partially set into the ground, and boiler house, more completely so. Morgan House, of eight storeys and with 49 flats, is in plan made up of two sections because the hostel undersails one half. Two access galleries on second and fifth floor, with stepped plan and deep planting boxes, the upper one serving four floors of scissor-plan flats, the lower one only half as long and serving three.
Charlwood House with dark timber swivel double-glazed casements (original), and many original dark timber doors. Vauxhall Bridge Road elevation dominated by the walkways oversailing hostel. Builder's premises with large folding timber doors set under large concrete soffit. Rear elevation more irregular, with paved patios and balconies on alternate floors. Hostel with painted concrete angled sills to first and second floor glazing, which has been renewed in dark metal. Ground floor with large plate glass windows to communal rooms. Community hall with timber fascia and windows. The boiler house set proud to north and of impressive sculptural form, without glazing. Morgan House with projecting lift tower to north, and access galleries. South elevation more regular, with nine bays of flats, four of them arranged in pairs over hostel, the five to the left being more irregular. All have balconies. All retain original dark timber swivel double-glazed casements and most have dark timber doors. Interiors not of special interest. Hostel with its own part-walled garden in angle of block. Retaining walls also to community centre and boiler house form an important part of the setting. Original metal signage of black lettering on silvered backgrounds. John Darbourne won a competition for the rebuilding of Lillington Street in 1961, and formed a partnership with Geoffrey Darke to develop the scheme. The design of Lillington took its cue from the important (grade I listed) Church of St James the Less, with its striking Victorian red brick, which the estate surrounds. Architects like Stirling and Gowan at Ham Common, Richmond; Leslie Martin at Cambridge University; and Basil Spence at Sussex University, Brighton, had begun to explore ways of using a combination of brick and concrete, but not on such a scale nor with such intensity of colour. Martin and his proteges had also begun to theorise on the possibilities of low-rise high-density housing in their Bloomsbury project and in their college work at Cambridge, but Lillington was the first low-rise high-density public housing scheme to be built. Lillington Garden was epoch making. 'The blocks are more reminiscent of the college campus of than of municipal tenements', wrote the Architects' Journal (1 July 1970). Lilllington influenced the style of council housing from the mid-1960s until the early 1980s. The scheme won a Housing Design Award in 1969, a Ministry of Housing and Local Government award for good design in 1970, an RIBA Architecture Award in 1970 and a further RIBA commendation in 1973. 'An elegant and exciting environment for young and old' (The Times, 13 September 1972). Charlwood House Old Peoples' Hostel was part of the original competition brief. It reflected the latest ideas of the Ministry of Housing and Local Government that the elderly should be found homes within new developments, rather than being treated separately, and that they should remain near their original communities. By incorporating a range of hostel facilities within blocks of ordinary flats Darbourne and Darke were amongst the first to respond to this directive of integration. Within, the accommodation they provided was lavish for its date and above the 'yardstick' costs later introduced.