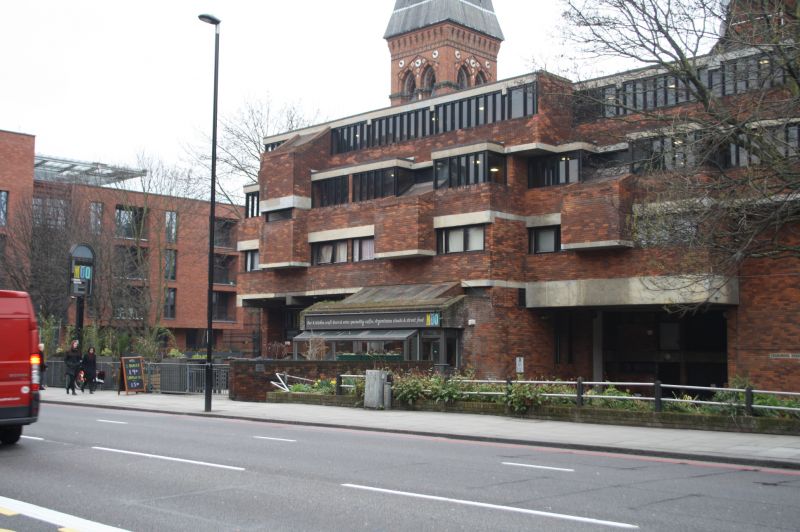 Public house, attached to Charlwood House (q.v.). Design won in competition in 1961 by John Darbourne; structure built 1964-67, interior fitted out 1968-9; architects Darbourne and Darke, Geoffrey Darke the partner in charge, with W D Shepherd, Chief Architect to Ind Coope Ltd., associated architect. Loadbearing brickwork with concrete floors, hand-made red and purple multi-coloured facings used outside and in. Pub entered via private patio. Large timber windows with timber door to right; above fascia a planting box part of the composition fronting first-floor publican's flat. Public house on three half-levels. Entrance on raised ground floor, whence steps lead down to main bar on half-landing, with steps at rear to basement games room (originally intended for dining). Bar with original timber counter and back bar. Timber ceiling with some areas of cork. The combination of exposed brick, some painted, and timber boarding is characteristic of the late 1960s architect-designed public house, blending modern planning with traditional materials. This was an exceptional example when it was built, and was extensively reviewed; it remains little altered and is a remarkable survival. It is also an important and integral element of Darbourne and Darke's award-winning and epoch-making Lillington Gardens scheme. It replaced a public house of the same name which was demolished. It was admired for 'its consistency of approach' (Architects' Journal, 15 April 1970).