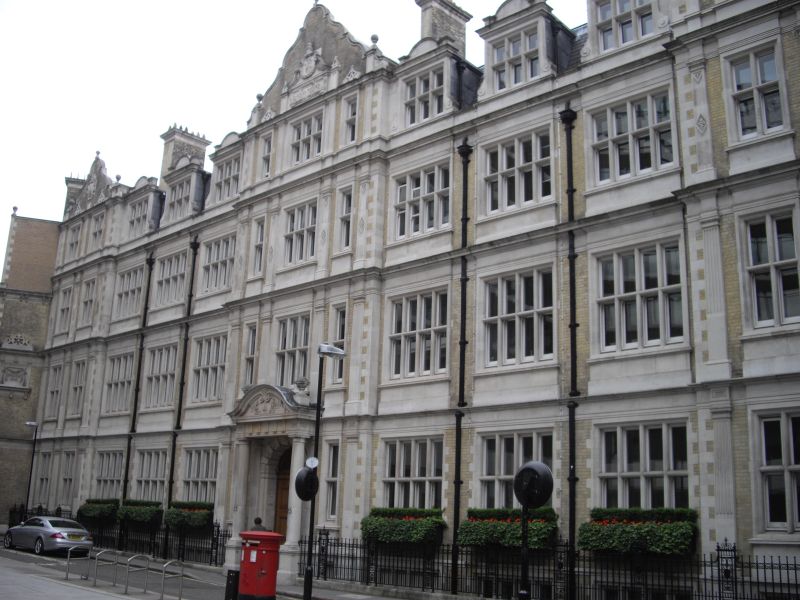 SOUTHAMPTON BUILDINGS
No 25 and attached railings

Library and Offices, 1890-1912. By the Office of Works' principal architect, Sir John Taylor. Construction supervised by Sir Henry Tanner (until 1905) and then H.N. Weekes, both also of the OoW.The general contractor for the project from 1892 to 1904/5 was B.E. Nightingale, and the builder John Perry and Co. The fireproofing of the Reading Room was executed c.1895 by the proprietary firm of Homan and Rodgers, one of the leading firms in fireproof construction at this time. The present complex also incorporates three bays of the elevation of an earlier structure, Staple Inn Chambers, designed and built in 1842-43 for the Taxing Masters in Chancery by the London-based architects Wigg and Pownall.

The primary elevations are a mixture of brick and Portland stone, with white glazed brick to internal courts. A great deal of concrete was used, and many of the roof members are steel. Steel joists, cast iron, and wrought iron are all found in the Reading Room. Wood finishing is largely oak. The roof is of plain tile and the stacks of moulded bricks.

The structure was designed and built as six distinct blocks between 1890 and 1912, and the following description describes each in turn.

The Patent Office and Library Block, 1897-1902, Block 4 in the overall sequence of rebuilding. This contains the most important interiors: the Reading Room itself, the entrance lobby, vestibule, double-height round stair (known as the Rotunda), and the Arbitration Room (now the Conference Room). Outside the long elevation is in the Elizabethan/Jacobean style to match the 1842-43 block (see Block 3 description below): this 130 ft. elevation to Southampton Buildings has a 13-window range and three storeys with attic over basement. The centre and outer bays are topped by a Flemish gable, and are articulated further by the application of Doric pilasters to each storey. All the windows have stone mullions and transoms, boldly moulded. There are shaped pediments to the dormer windows. The entrance aedicule has fluted Doric columns supporting a triglyph frieze and curved pediment. Elaborate front railings with decorative panels at intervals. The long elevation to Southampton Buildings is, essentially, a perimeter structure, one office deep with an accompanying corridor; another perimeter range returns to the south, along the party wall and leads to the link with Block 2 (see below). Behind these ranges is the rectangular Reading Room, roughly 140 feet long and nearly 60 feet high, which is articulated by two galleries carried on Corinthian columns. The junction between this nearly free-standing, Reading Room block and the perimeter ranges is achieved by a vestibule with apsidal ends to the north and south and decorative plasterwork. To the west of the Vestibule is the double-height and top-lit round stair, known as the Rotunda which leads to the former Arbitration Room, now the Conference Room, which sits above the Vestibule. All these spaces have sober embellishments, the grandest being the dome to the stair, the staircase itself, and the barrel-vault to the Conference Room, which is carried on Ionic pilasters.

The Reading Room itself is of high quality and a splendid space, roughly 140 feet long and 60 feet high. It is constructed on an atrium plan, with two tiers of galleries carried on cast-iron columns. The gallery fronts have decorative wrought-iron panels between cast-iron balusters. Two dog-leg staircases with decorative wrought-iron balustrades to first floor of gallery. The most up-to-date fireproof construction method was employed, as well as a very modern integrated heating and ventilating system. The glass roof is carried on arched principals. The original iron shelving and tables by W. Lucy and Co. To the patented design of Lambson survive in the bay areas.

Block 1, known as the Court Room Block, 1891-94, of brick and stone, also by Taylor. It has three storeys over a basement and a five-window range on the north side of Tooks Court. The style is austere but handsome, the window architraves, sill bands and cornice Italianate in character. In plan this block is rectangular, its east wall forming a clear division between 25 Southampton Buildings and the part of the complex comprehended by the address 10 Furnival Street. There is a substantial open-well stair at the south end, and towards the north, roughly east of the northeast corner of the Reading Room, is the eponymous Court Room, a handsome interior complete with fittings.

Block 2, 1892-93, has a trapezoidal plan with a correspondingly shaped light court at the centre, with a fifteen-window range facing into this court, all sheathed in glazed white brick. There are two elevations visible from public highways, the longest on the west side of Tooks Court and has a seven-window range. The detailing and materials match those used on the Tooks Court elevation of Block 1 noted above. Between these two ranges is the Tooks Court entrance to the complex, a service entrance which is of carved stone, possibly Portland, featuring a shallow, segmental arch. The interiors of Block 2 are very plain, a noteworthy feature being the exposed cast-iron columns that support the floors. The northwest corner of this block forms an entrance from Quality Court; the architectural treatment is identical to that used on the two Tooks Court elevations already described.

Block 3 with a long elevation to Staple Inn Gardens, 1890/91-97. Taylor retained the facade of the earlier Staple Inn Chambers by Wigg and Pownall, a six-window-wide elevation of three stories with shaped gables over all but bays two and five. This was illustrated in The Builder (1843, p. 171). He extended the elevation to 11 bays, with a total of seven shaped gables, making that in bay six (formerly bay one) larger than the rest. All that survives of the elevation that was finished in 1897 are the three right-hand bays of Wigg and Pownall's building for the Taxing Masters in Chancery. Taylor's elevations to the east were destroyed by a V1 rocket, and the front was rebuilt in 1954-5 by the Ministry of Works in a modern style, retaining part of the structure behind including the rear walls of this and the 1843 block.

Block 5 is comprehended by the address 10 Furnival Street, and was constructed in sections between 1902 and 1912 to Taylor's plans. This block has an 18-window range and four stories over a basement. South end lost a window bay as a result of war damage. The entrance has a handsome aedicule with a swan-necked pediment. Original elaborate front railings with decorative panels at intervals. In plan this building has a corridor running on the north-south axis set to the rear of the offices facing Furnival Street. Three corridors run west off of this towards the join with Block 1 on the south and Block 3 on the north.

Block 6 (25 Southampton Buildings) with an elevation to Quality Court (north side), 1903. Three storeys and a twelve-window range, the latter broken up into quarters by narrow brick piers. Red brick with stone cills and bands; the ground floor is facing in stone. Rectangular in plan, set in the small space on the north side of Quality Court and abutting Block 2 to the east and Block 4 to the north. Block 6 was completed in 1903.

HISTORY: The Patent Office was established in offices on this site by an Act of 1852. The first Patent Office Library was opened to the public in 1855, and fitted into a late eighteenth-century building constructed for the Masters in Ordinary in Chancery and for the Secretaries of Bankrupts and Lunatics. Between 1865 and 1867 James Pennethorne, Office of Works, constructed a special reading room/library block on the first floor of this an earlier structure; interestingly, Taylor's own Reading Room designs refer in a general way back to this well-loved space. In a review of Pennethorne's building, the journal The Engineer (1867) noted that the collection comprised the `finest library of science and art in the world'. This reading room-cum-library was extended in 1886. The structure was demolished between 1897 and 1902, to make way for the present Reading Room.

No.25 Southampton Buildings was included in the list 27 April, 1989; No.10 Furnival Street is added by this amendment.