The Hall and Attached Railings 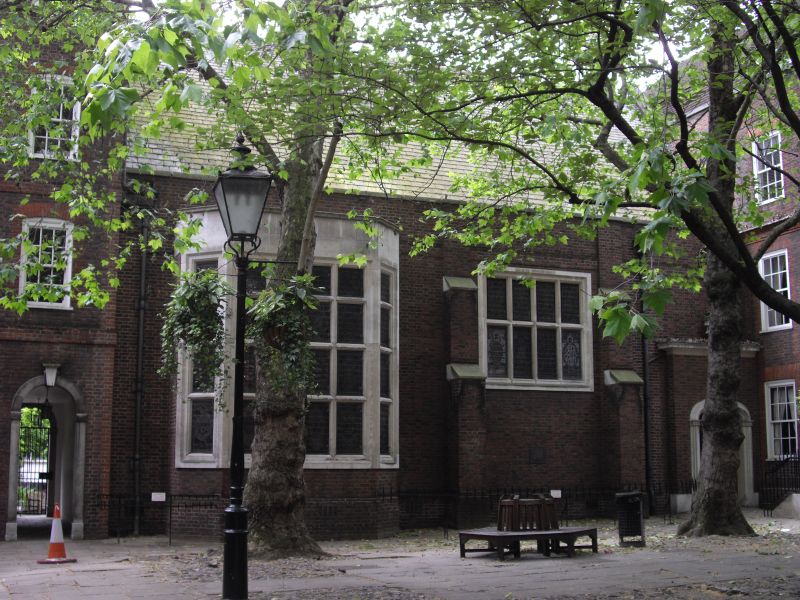 Banqueting hall forming part of the south side of a courtyard. 1581 by for Richard Champion, principal of the Inn. Destroyed during Second World War and rebuilt in facsimile c1955 by Edward Maufe. Brown brick with stone dressings. Slate roof, parapet with plain band below. Single storey. 4 bays with former "screens" at west end. North facade to Staple Inn Court with 2 buttresses (Stone capped off-sets) flanking 4-light transom and mullion window, 6-light, transom and mullion, canted bay window to left and to right a shallow brick porch with moulded stone ogee door surround, surmounted by a cartouche with clock over. Subsidiary feature: attached railings. South facade to gardens with 4 buttresses (stone capped off-sets) flanking 3 3-light transome and mullion windows. To left, Gothic doorway dated 1753 and approached by inswept flight of steps with railings. Clock over dated 1757. Two rainwater heads dated 1954. At the west end of the roof a cupola with bell. To the right, over the 3rd bay, a louvre with stained glass panes, ogee lead cupola and weathervane.
INTERIOR: with facsimile hammberbeam roof and facsimile Jacobean panelling at the west end, under the gallery, reproducing the design of the former screen.
HISTORY: Staple Inn, comprising Hall and Chambers, became an Inn of Chancery early in the Cl5. It suffered considerable bomb damage during the 2nd World War. Formerly Listed in the LB of Camden. Since 1 April 1994 Staple Inn has been within the City of London.