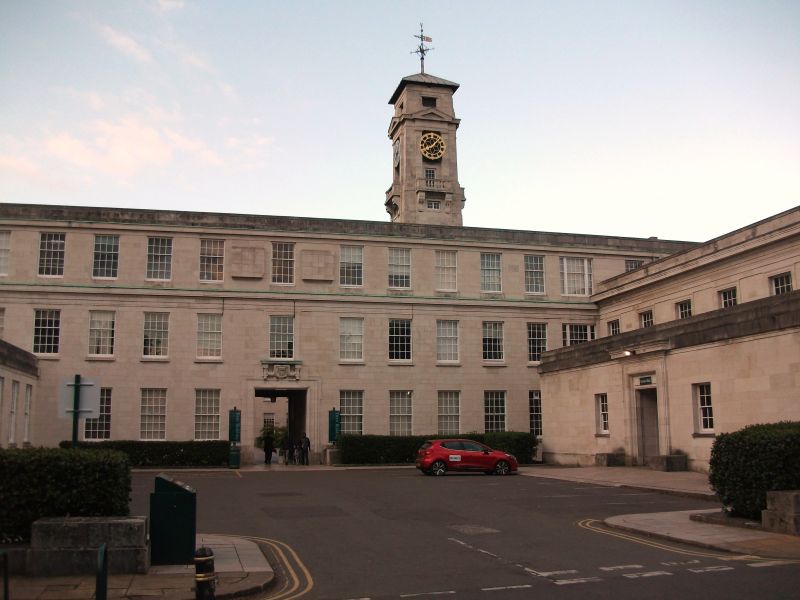 Educational building, now university. 1922-28. By Morley
Horder for the University College of Nottingham. Site provided
by Sir Jesse Boot of Nottingham. Portland stone with copper
roofs. Classical Revival style.
EXTERIOR: ground floor string course, main and attic cornices,
coped parapets. Windows are mainly original glazing bar
sashes. Symmetrical composition with central block recessed
between wings and topped by a tall clock tower. 2 storeys plus
basement and attics; 7:17:7 windows. H-plan, with central
quadrangle flanked to east and west by open-ended courtyards.
In the centre, a projecting portico, 3 windows, with pediment
containing a crest. Cross-casement French windows to basement
and ground floor. Above the portico, the square bell tower
with angle pilasters and pyramidal roof with wind vane. On the
middle stage, pedimented aedicules and clock faces.
Side wings, 2 storeys plus basement, are divided by giant
pilasters, doubled at the corners. East wing has an extended
basement, 7 windows.
In the quadrangle, under the tower, the projecting main
entrance, with a round-arched opening, 2 storeys, containing a
moulded ashlar doorcase with a Diocletian window above. Over
it, a tripartite attic window, and a flat gable with a large
datestone, 1928, and Latin inscription. The other sides have
regular fenestration and central doors.
East courtyard has regular fenestration on each side, with
central doorways to east and north. Similar west courtyard,
flanked on north and south by single storey ranges.
INTERIOR has stone panelled lobby, entrance hall, and
corridors on each floor. Entrance hall has moulded cross beam
ceiling on 4 granite Doric columns. East wing has a concrete
open well stair. Adjoining library, 2 storeys, has panelled
ceiling with skylights and cross beams. Largely intact
original fittings including wooden screens and balconies in
each bay. West wing has Great Hall, 2 storeys, marble clad,
with panelled cross beam ceiling. Arcades, 7 bays, with square
piers, galleries, and central doors. Coved ends, one with
stage, the other with organ gallery.
(The Buildings of England: Pevsner N: Nottinghamshire: London:
1979-: 256-257).