A Grade I Listed Building in Manchester, Manchester 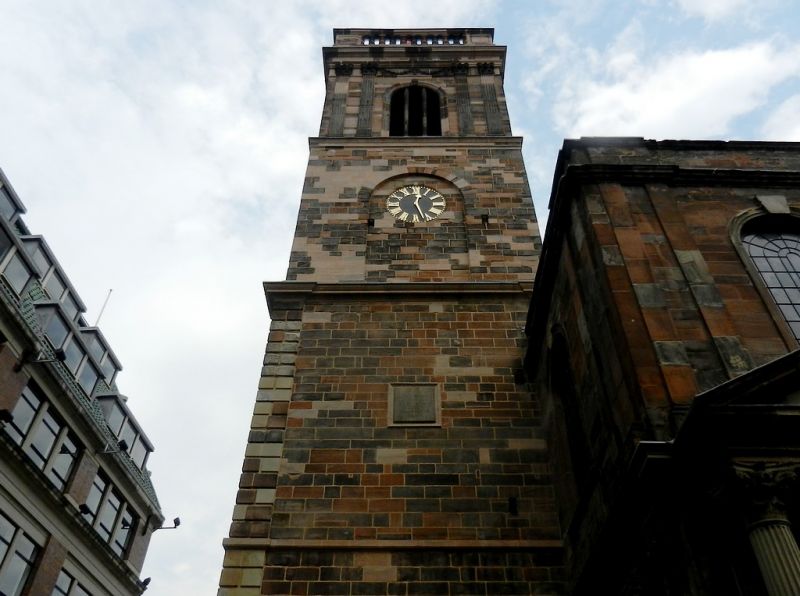 Church. 1709-12 (traditionally said to have been designed by
Sir Christopher Wren or one of his pupils); restored 1886-91 by
Alfred Waterhouse. Sandstone ashlar, hipped slate roof.
Classical style. Nave with east apse and west tower. The
2-storey 6-bay nave has coupled pilasters to both levels, the
lower being fluted Corinthian and the upper plain, both with
cornices, each bay containing large round-headed windows with
keystones, and the westernmost a square headed doorway in a
large pedimented tetrastyle Corinthian doorcase with fluted
columns; and a pilastered parapet (formerly with urns). The
semi-circular full-height apse has tall fluted Corinthian
pilasters, a full entablature with carved emblems on the
frieze, a very prominent cornice, and large round-headed
windows with panelled aprons, moulded imposts and enriched
keystones. The square west tower has four stages divided by
string courses and a mid-height cornice, rusticated clasping
corner pilasters to the lower half, a Tuscan pilaster west
doorway, coupled round-headed lancets to the second stage, an
oculus in a blank arch to the third stage (and clock-faces under
segmental pediments in the north and south sides), a belfry
stage with coupled fluted Corinthian pilasters framing
round-headed 3-light louvred belfry windows with keystones,
and a moulded cornice and balustraded parapet (originally
surrounding a 3-stage cupola).