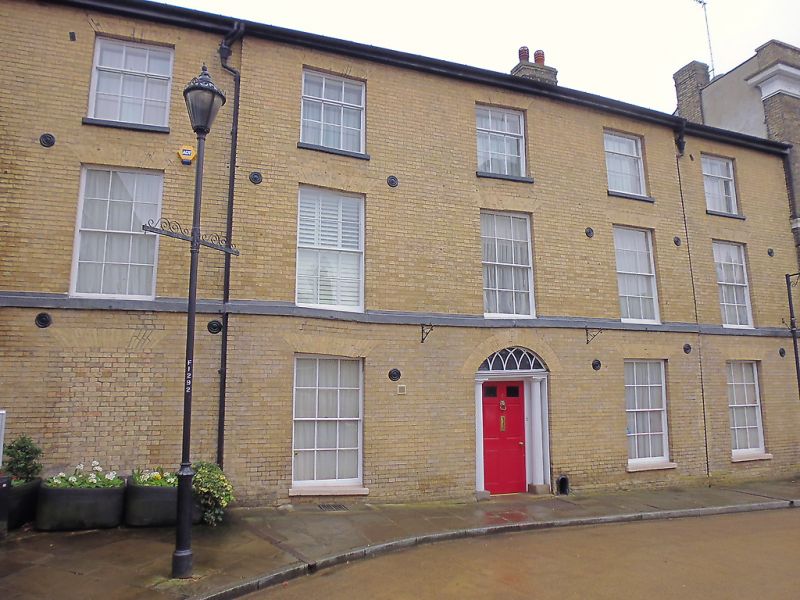 INTERIOR: Ground floor hall of 3 bays with lower undershot but integral cross-passage bay. Rear wall of hall C14 flint rubble: small blocked early C14 freestone doorway with pointed arch, set in a deep segmental-arched recess. Remainder of walling timber-framed. Complex roll-and-hollow mouldings to beams and roll-moulded joists in ceiling above hall. Lower part of jettied exterior front wall concealed behind brick facade: moulded shafts and brackets with polygonal capitals; moulded rail at window sill level, moulded mullions to continuous windows. Moulded spere beam at cross-passage: blocked front door has moulded jambs and evidence for pointed arched head; rear part of passage divided off apparently for staircase; unchamfered heavy joists. 2 chambers over hall: tension-braced close studding; doorways with 4-centred heads and 2 orders of hollow chamfering. Tiebeams with evidence for archbraces and crownposts visible in floors of attics. Rear rafter-slope remains but front roof-slope rebuilt c.1813 to lower pitch.
Medieval cellar beneath hall of flint and limestone rubble: a doorway of brick and limestone in the front wall. Other fragmentary medieval features from C12 onwards with major alterations probably C17 (Until the late middle ages Chequer Square was at least 2 metres lower than at present, implying that this was an undercroft near to ground level).
North range to right of 4 bays, built before 1463 as lodgings for St Mary priest of St James's Church (on ground froor) and for St Mary priest of St Mary's Church (1st floor). Plain chamfered main beams and unchamfered 1st floor joists. Tension-braced close studding. Evidence for 2-storey gallery along rear wall: a narrow 1st floor doorway with steep 4-centred head, once leading to graderobe. Evidence for jettied front wall.
Chimneystack inserted at centre of lodging range c.1500-1530: 3 fireplaces, and evidence for a 4th: moulded arched brick openings. The 2 northern fireplaces have plastered recessed panels with a fine moulded-brick arcade of 5 arches each trefoil-cusped, with ruddle and white pencilling: the upper fireplace panel has grotesque scheme c.1600, of 'a strapwork cartouche surrounded by elaborate intertwining foliage, interspersed putti and fantastic birds'. The ground floor fireplace panel has 'black letter text with perhaps a pictorial or a decorative design below the text', mainly concealed by later whitewash. The narrower southern 1st floor fireplace has a similar recessed panel of tall proportions with an arcade of 2 cusped arches with ruddle and pencilling to the chimney breast, refreshed in at least 2 phases.
Several phases of painted decoration traced on walls of both northern lodging rooms, the earliest probably pre-Reformation.
Ground floor gallery wall has 'substantial section of very good quality arabesque decoration...(Traces of earlier scheme beneath):.... plain red or patterned; a green and a pink colour can also be glimpsed through losses in the black and white scheme'.
Rear C15 or c.1500 gallery range faces garden. 3 and 1/2 bays, truncated at rear. Close studding: a 1st floor window with mullions of complex form and evidence of arched headed lights. Trusses with unjowled and unbraced posts, square crownposts with thick 4-centred archbraces up to collar purlin. Truss 4 from the east was closed; truss 2 became closed in C15 or C16.
Stair wing to rear added late C17 or C18: early C19 staircase with wrought-ironwork balustrade introduced from Hardwick House, Bury St Edmunds in early C20.

HISTORY:
Although there are fragments which survive from the C12, the cellar is mainly an undercroft or lower part of a stone open hall built in the C14 or earlier. The present hall was built over the top.
John Baret was an outstanding figure in Bury St Edmunds, granted 'SS' status by Henry VI; his will (1463) gives exceptional detail of the complex design of this house; he is buried in his chantry chapel at St Mary's Church nearby. It was he who built the lodging range for the priests and it is likely that the hall range was rebuilt for William Baret (d.1506), John's nephew and heir.
3 bays of the rear gallery range survive, but Warren's map of 1747 indicates that it was formerly at least 2 bays longer, reaching to the boundary wall with Bridewell Lane.
The Golding family, local gentry, owned the house in the C16/C17 and it is possible that some of the painted decoration was commissioned by them.
William Steggles leased the house in 1813, agreeing to spend £300 on repairs within 2 years: he rebuilt the front wall, inserted attics, sash windows, panelled doors, and made major internal alterations.

SUMMARY OF IMPORTANCE:
This is a major late medieval town house with earlier origins and later alterations. As well as much high quality timber framing, very important features survive including a C14 doorway, the mid C15 priests lodging range, the fine hall ceiling of c.1500 with moulded beams and joists and very significant painted decoration on the c.1500 stack both pre-Reformation and later, the stack itself having fine moulded brick panels above the fireplaces. The survival of the will made in 1463 by John Baret, the owner of the house and builder of the lodgings, gives additional significance to the buildings in that it gives exceptional detail of the complex design of his house.