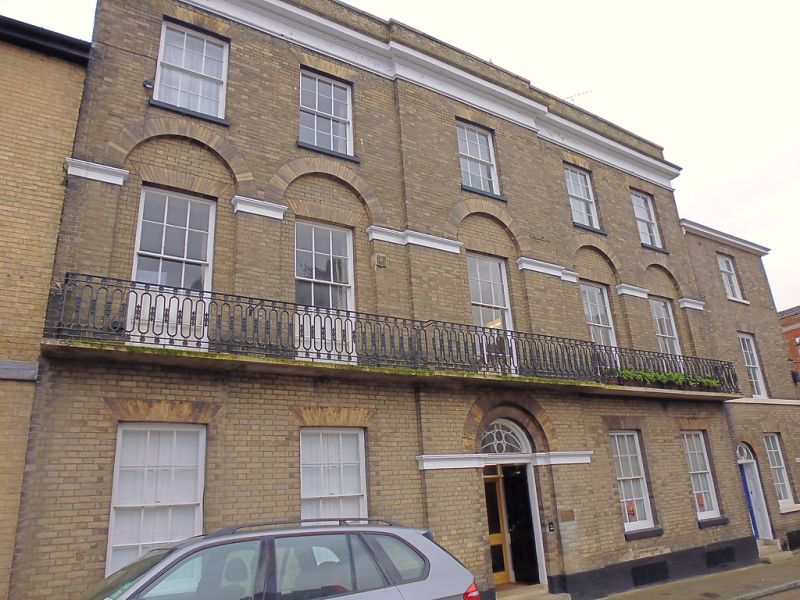 House, now divided into flats with a shop on part of the first
storey. Early C19 with core of c1700. White brick; slate roof
with parapet and cornice.
EXTERIOR: 3 storeys and cellars, which also run below No.5
(not included). 5 window range, arranged 2:1:2 with the centre
breaking forward slightly. The first storey windows extend to
floor level and are set into semicircular-headed recesses with
stucco impost bands. All windows are 12-pane sashes with flat
gauged heads and deep reveals. A cast-iron balcony with ornate
railings runs across the whole first storey front.
The central doorway has a 6-panelled double door with circular
middle panels and a fanlight with ornamental glazing which is
set into a shallow double-arched recess with plain stucco
impost bands. A late C19 2-storey rear extension in white
brick with slate roof.
INTERIOR: the cellar, divided into 3 sections, is mainly lined
with old bricks; some flint rubble along the front wall.
Reused ceiling-beams, some with C16 mouldings. The outstanding
feature of the interior is the fine late C17/early C18 open
well stair with heavy barley-sugar twist balusters, plain
moulded handrail, square newel posts, moulded closed strings
and panelled dado. It rises the whole height of the house and
terminates in a balustrade across the landing of the top
storey. The panels of the dado were mainly replaced in the
early C19, but several sections with bolection-moulded
surrounds survive, and on the 1st storey the 6-panel doors
have bolection-moulding to the architraves. This building
stands on the site of the former Chequer Inn.
(BOE: Pevsner N: Radcliffe E: Suffolk: London: 1974-:
150-151).