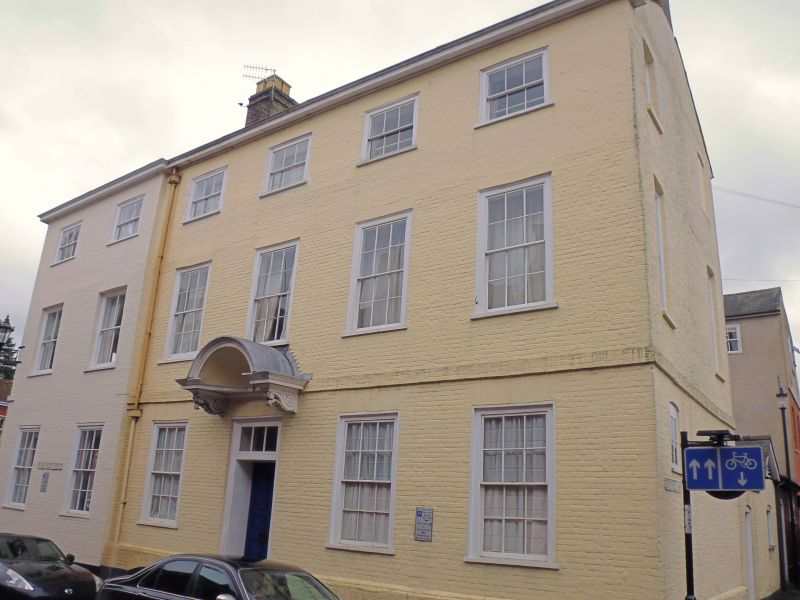 Includes: No.5 CHEQUER SQUARE.
House, now offices. c1700. Painted brick; slate roof with a
plain eaves cornice.
EXTERIOR: 3 storeys and basement. 4 window range: 12-pane
sashes in flush cased frames to ground and 1st storeys; 6-pane
to 2nd storey. A raised band between the ground and 1st storey
windows. Within the plinth at pavement level 3
segmental-arched openings to light the basement with barred
cast-iron grilles. An off-centre entry has a fine lead-covered
shell hood, supported on ornate console brackets, and a
recessed door with 6 raised fielded panels and moulded
surrounds, up steps. At pavement level beside the doorway, is
a stone-lined recess with an arched head.
Adjoining on the east, and now part of No.38, is the former
No.5 Chequer Square. Early C19 with an earlier core. White
brick, painted on the Churchgate Street frontage; a hipped
slate roof with a plain eaves cornice; internal chimney-stack.
The Churchgate Street front has a 2-window range, all sashes,
12-pane with flush cased frames to the ground storey, plate
glass in shallow reveals to the 1st storey and 6-pane in flush
cased frames to the 2nd storey. A single window to each storey
on the Chequer Square frontage, 12-pane sashes in shallow
reveals, with gauged flat arches and projecting stone sills,
to the ground and 1st storeys, a replacement small-paned
window to the 2nd storey. A continuous raised stucco band
below the 1st storey window. A rectangular basement window at
pavement level. Entrance door, up 3 steps, has 6 raised
fielded panels, panelled reveals, a plain brick surround with
a segmental-arched head and a fanlight with circular
glazing-bars.
INTERIOR: the cellar below No.38 contains 2 fireplaces and was
used as a kitchen. The cellar below the former No.5 Chequer
Square is only accessible from No.4 Chequer Square (qv), and
Warren's map of 1791 indicates that the 2 houses were formerly

one. No original features are exposed in No.38, but the former
No.5 Chequer Square which has a single room on each storey,
has early C18 panelling covering the walls of the ground
storey room, the long upper panels separated from the dado by
a raised moulded band. On the 1st storey is a
bolection-moulded fireplace surround and a panelled dado with
heavy raised mouldings.