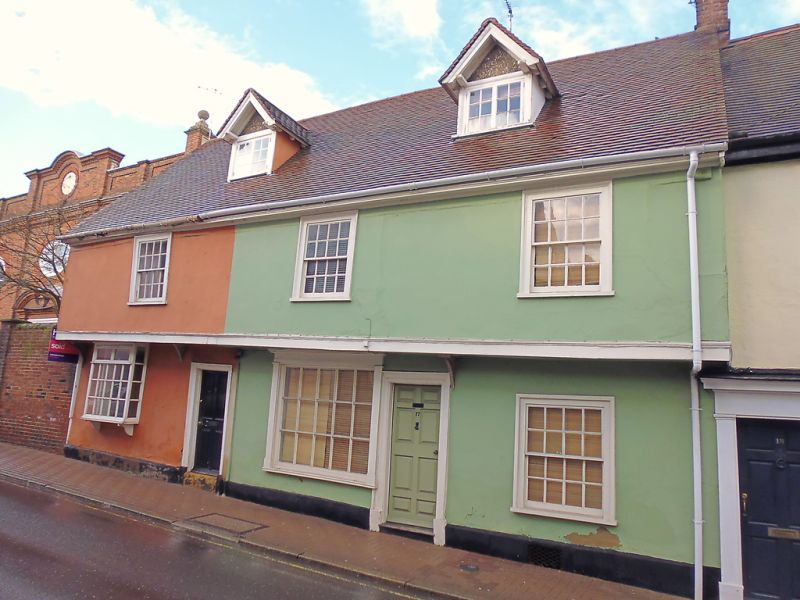 House, divided into 2. C16, altered in the C18 and C19.
Timber-framed and rendered with jettied front; plaintiled
roof.
EXTERIOR: 2 storeys and attics. 3 window range: 16-pane sashes
in cased frames. The ground storey has an C18 bay with a
moulded sill supported on plain curved brackets and an early
C19 shop window with moulded pilasters and cornice, both with
fixed 15-pane windows. 2 C20 gabled dormers with projecting
eaves and 2-light small-paned casement windows. Solid arched
brackets support the jettied front, which was widened to allow
for the insertion of the later sash windows. 2 doorways with
moulded surrounds: 4-panelled half-glazed door to No.16, and 8
sunk panels to No.17.
INTERIOR: this was a single 3-cell 4-bay house, divided into 2
in the early C19 by stud partitions: No.16 now contains
one-and-a-half bays and No.17 the remainder. The original
framing is plain and substantial: main beams, posts,
wallplates and some studding are exposed. Both end bays were
partitioned off, leaving a 2-bay single-storey hall in the
centre heated by a chimney-stack on the rear wall. The main
cross-beams are plain and heavy with a chamfer and curved
stepped stops.
On the upper storey of No.17 widely spaced studding and
tension bracing are exposed along one partition wall; in the
front wallplate, a slightly splayed edge-halved and bridled
scarf joint. Long jowls to the main posts. Unusually, both end
bays have evidence for a former division into 2, with a row of
mortices in the soffit of each main beam.
In No.17 the sawn-off tenons of the partition studs are still
in situ, whereas in No.16 there are no associated peg-holes or
tenons, and the partition may never have been completed.
Roof-timbers mainly concealed; roof-structure of a side-purlin
type, probably clasped.
This is one of several buildings in the town where the jetty
has been widened to allow for Georgian sashes to be inserted:
cf. Nos 25 & 26 (qv) for similar treatment.