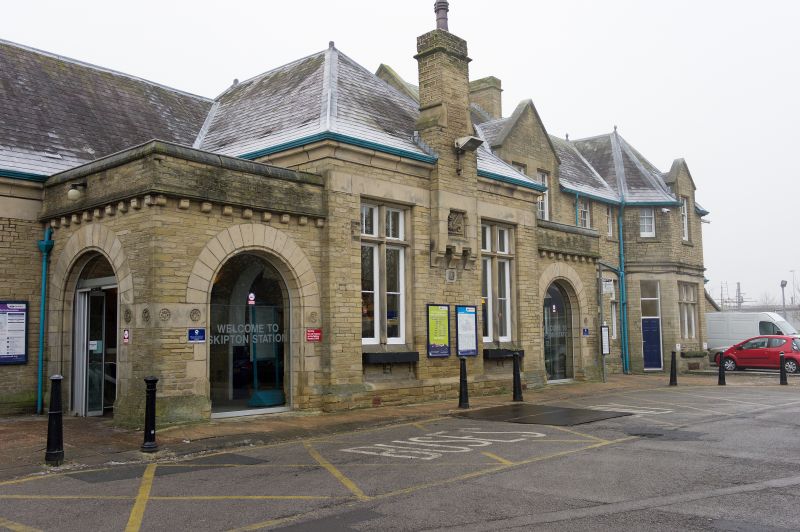 Railway station. 1876. Designed by Charles Trubshaw for the Midland
Railway. Coursed rubble with ashlar dressings and slate hipped roofs. Chamfered
plinth and moulded eaves to single storey ranges continued as a band across 2 storey
range. North entrance front, largely single storey. Projecting central entrance
block has 2, 2 light cross mullion windows in sunk panels, with between a projecting
upper stack supported on 3 corbels with a carved relief panel. Either side are
single round arches with corbelled eaves and coped parapet, return walls have
similar arches. Set back to left a single 3 light cross mullion window, with beyond
a slightly set back similar window. Beyond a narrow single bay recess filled by a
lower parapeted section with a plain sash. Beyond a projecting canted bay window,
with a central 3 light and flanking single light cross mullion windows and a taller
hipped roof. Beyond a further set back section. Set back to the right a 4 bay
2 storey block, with an off-centre doorway and blind overlight, with to the left a
3 light and to the right a single light cross mullion window. Beyond a canted
2 storey bay window with a similar 3 light and flanking single light windows. Above
to the left a pair of glazing bar sashes in a single through eaves gable, to the
right 2 glazing bar sashes and beyond the bay has a single glazing bar sash in
through eaves gable with flanking smaller sashes.Beyond a single storey wing, with a
3 light cross casement. South platform front, has 13 bay projecting glazed canopy,
supported on 14 cast iron columns with capitols and ornate iron brackets, each bay
has a hipped glazed roof with segmental decorated iron trusses and elaborate iron
finials. Central flat headed archway flanked by single ashlar segmental arches. To
the left a doorway, a 2 light and then a single light window, a doorway, 2 single
light windows, a doorway and a further single light window. Projecting wing beyond
has a 2 light window, a round arch, a 3 light window and a small doorway. To the
right a doorway and 2, 3 light windows, and a round arch, projecting wing beyond has
a 3 light window and an entrance beyond. All these windows are ashlar cross mullion
casements.