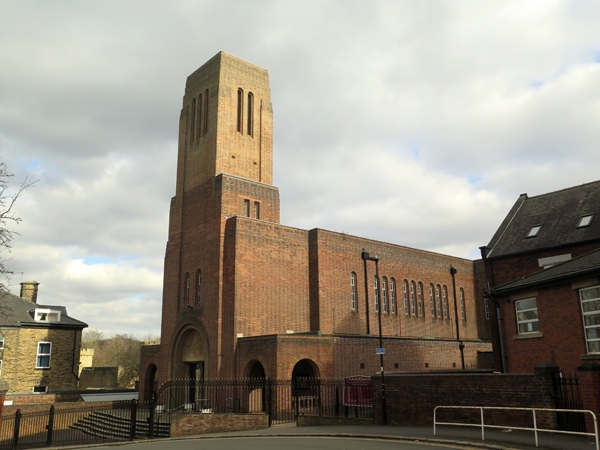 Roman Catholic church. 1936. Designed by CM Hadfield. Red
brick with brown brick and ashlar dressings and plain tile
roof. Romanesque Revival style.
PLAN: nave with apse, side chapels, transepts, vestries, nave
with clerestory and aisles, west tower, porches.
EXTERIOR: plinth, coped parapets. Windows are mainly metal
framed casements. Chancel has 5 incised string courses. On
either side, 3 windows, and below them, windowless square side
chapels. Windowless apse. Square ended transepts have each a
large round window, and to west, a single window. South
transept has to west a square projection with 3 flat-headed
windows, containing confessionals. North transept has a single
storey vestry, 2 x 3 windows.
Clerestory has 11 windows on each side, arranged 1:3:3:3:1.
Aisles are windowless. South side has off-centre canted
baptistry, also windowless. West tower, 3 stages, has corner
pilasters forming panelled sides, stepped cheeks to north and
south, and deep parapet. Ground stage has central round-arched
west doorway with projecting brick surround and ashlar central
pier with relief carving, flanked by double board doors.
Relief carving in tympanum by Lindsey Clarke. Above the door,
2 windows. Second stage has 2 flat-headed windows to north and
south. Bell stage has 3 round-arched louvred openings to east
and west, and 2 similar openings to north and south.
Flanking the tower, single square porches with round-arched
openings to west and in either side, with corresponding inner
doorways. North and south openings have brick balustrades. To
north, a single storey corridor linked to the Presbytery (not
included).
INTERIOR: nave and chancel have continuous cross beam ceiling.
Sanctuary has large mosaic panel by Eric Newton, with a
recessed tabernacle. Chancel has a round-arched recess on each
side into the side chapels. Side chapels have segmental east
ends with sculptured figures, and panelled ceilings with
rooflights.
Transepts have to east round arches to the side chapels, and
above them, mosaic panels by Eric Newton, 1961. South end has
a figure niche, north end a round-arched recess with double
doors to the vestries.
Nave has 5 bay round-arched arcades to narrow side passages,
which have blind arcades. At the west end, projecting single
bays with round-arched doorways. South-east side has panelled
double doors with blank overlight, to confessionals. North
side has baptistry entrance with wrought-iron screen and
overthrow. West end has 3 round arches, the larger central one
with double doors and overlight, the flanking ones with single
doors. Above, a gallery with round-arched wooden balustrade.
Entrance lobby has doors on 3 sides, and cast-iron spiral
stair to gallery.
Fittings include octagonal stone font with panelled octagonal
wooden canopy topped with a spire supported by volutes, 1953.
Teak benches and plain octagonal panelled pulpit and lectern.
No memorials.
(150 Years of Architectural Drawing: Hadfield, Cawkwell,
Davidson: Sheffield: 1984-; Church Golden Jubilee Booklet:
Sheffield: 1986-).