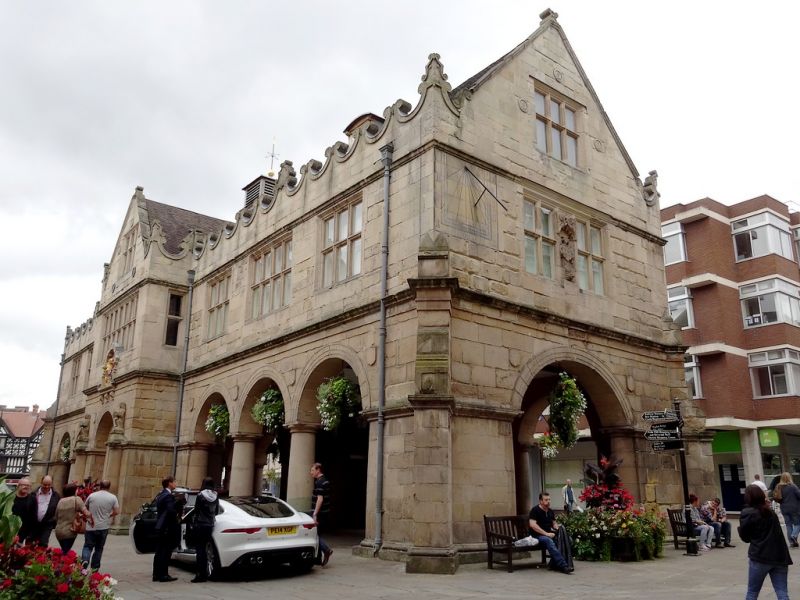 Former market hall, now (2004) cinema and café. Built in 1594-5. The designer is unknown but the building is attributed to Walter Hancock (master mason), Roger Smith (joiner) and Richard Morris who oversaw the project.

Former market hall, now (2004) cinema and café. Built in 1596-7. The designer is unknown but the building is attributed to Walter Hancocks (master mason), Roger Smith (joiner) and Richard Morris who oversaw the project.

MATERIALS: constructed of red sandstone, faced with squared and coursed Grinshill stone, and under a clay tile-covered gabled roof.

PLAN: an elongated cruciform plan with short projecting wings to its west and east sides.

EXTERIOR: the two-storey, seven-bay building is designed in a Classical Renaissance style. It has a moulded stone plinth and a moulded string course at ground- and first-floor level; the latter repeated to the capitals of the Tuscan columns. Above the first-floor windows is a continuous hood mould. The decorative parapet has reverse volutes. The principal elevation (west) comprises the central, single-bay wing, flanked by three bay arcades of Tuscan columns supporting semi-circular arches, with three, four-light mullion and transom windows to the first floor. The projecting central bay has a semi-circular arch with a three-quarter Tuscan column to either side, surmounted by a stone statue. Above the arch is a stone carving of the Royal Coat of Arms of Elizabeth I in relief. This rises above the cill of the first-floor seven-light mullion and transom window. To the gable is a three-light window. The gabled north and south elevations have offset diagonal buttresses and a central semi-circular arch supported on Tuscan three-quarter columns. To the south elevation pairs of mullion and transom windows flank a statue set in a stone niche with a decorative stone canopy above. To the left is a sun-dial and there is a three-light window to the gable. The first floor of the north elevation has the same arrangement as the south side but the windows contain stained glass and flank a statue of Richard, Duke of York which was brought from the medieval Welsh Bridge by the orders of the town mayor in 1771. Below the statue is a plaque giving the names of the bailiffs in the year of construction. There is a C20 clock to the gable. The east elevation is the same as the west, although the wing is plainer and lacks the moulded plinth. Within the semi-circular arch is a lower arch-headed opening. The arch has been blocked with stone ashlar, with modern brickwork to the lower arch.

INTERIOR: not inspected (2015). The ground-floor is open. The ceiling beams which span between the arcades have lambs tongue stops and are supported on early-C19 iron brackets. To the west side a lift has been inserted, and to the east side is a stone staircase. The first floor, which has been converted to a café and cinema, has exposed late-C16 roof trusses with two rows of through purlins, cusped wind braces to the roof panels, and ashlaring (the use of short vertical timbers rising from an inner wall plate to the rafters). The roof trusses include a tie-beam truss with Queen posts, a collar and tie beam truss with Queen posts, an open arch-braced collar truss with angled struts, and a double collar and tie-beam truss with lower king and queen struts.

A market was held on this site in Shrewsbury from the mid-C13. A first market hall was built in the Square in 1566-7.The existing market hall, which replaced it, was built between the 15 June 1596 and the end of September 1597. The ground floor, which forms an open arcade, was used as a corn exchange. The first-floor, which was accessed via a staircase in the east wing, and perhaps an additional staircase at the southern end, was used to sell wool. The first floor was originally open to the roof and consisted of a large room at the north end and a two-bay room to the south, separated by a timber-framed wall. The east wing was separated by a masonry wall.

By the early C19 the wool trade was in decline and the first floor of the market hall was converted to warehousing. In the mid-C19 the corn market moved to a new purpose-built corn exchange, named the Market Hall, and in 1867, the building became known as The Old Market Hall. During the 1870s, the first floor was converted to a magistrates’ court and a ceiling inserted. It remained as such until the 1970s when there was a radical re-ordering. In 1994 the court services were relocated. The building then lay vacant for several years. In 2001-2 it underwent a £1.7 million restoration overseen by the conservation architects Arrol & Snell which revealed and repaired much of the original fabric. At the same time a lift was inserted into the west wing. The building was then converted into a cinema and café by Glenn Howells Architects, and re-opened in 2004.

The Old Market Hall, built in 1596-7 and now used as a cinema and café, is listed at Grade I for the following principal reasons:
* Architectural interest: a relatively rare survival of a late-C16 market hall which retains its form and displays good quality architectural detailing and use of materials;
* Historic interest: an important, high-status example of its type which illustrates the growing emergence of a new and more dignified attitude towards the market hall.