A Grade I Listed Building in City and Hunslet, Leeds 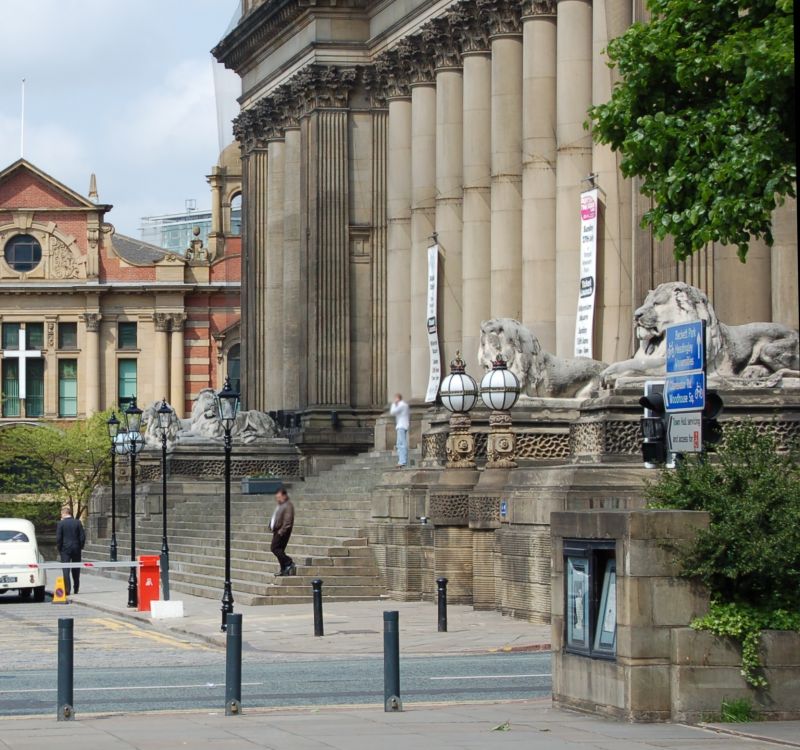 Town hall. 1853-58, altered 1877. By Cuthbert Brodrick,
sculptures by John Thomas. Alterations 1877 by AW Morant, the
Borough Surveyor. Millstone grit from approx 17 different
quarries including Rawdon Hill (for carvings), Sturdy and
Pool; Darley Dale stone from Derbyshire used in many of the
columns; slate and lead roof. Portland stone lions by William
Day Keyworth of London, 1867.
STYLE: Classical/Baroque
EXTERIOR: 2 storeys over basement which is terraced into the
sloping ground to rear (Great George Street). Rectangular plan
with slightly projecting wings on S, W, and E sides and centre
on N side; a central public hall with court rooms and former
council chamber at the corners, linked by corridors and
offices. Round-arched windows throughout. On each facade the
heavily rusticated base supports a giant Corinthian order of
columns and fluted pilasters; an entablature surmounted by
balustrade with urns runs all round the building.
South front: the principal entrance is reached by a wide
flight of stone steps flanked by 2 plinths with stone lions;
basement entrances to left and right have giant pedimented
lintels and screen wall with paired globe-shaped lamp
standards. 10 giant Corinthian columns form a colonnade across
the recessed entrance which is composed of 3 paired doors with
ornate grilles below a round-arch tympanum with large
sculptured group representing Progress, Art and Commerce.
Set back above the south entrance the clock tower, approx
68.6m high, is composed of a deep plinth with rusticated
panels, scrolled corner brackets, paterae and coat of arms; a
square colonnade of 21 Corinthian columns supports a
pulvinated frieze, dentilled cornice, balustrade and urns;
openwork scrolled corner finials flank clock dials topped by
elongated lead-clad dome with concave sides surmounted by
cupola. 4 ornate ventilation shafts rise above the eaves line:
square in section, moulded panels with corner paterae, frieze
with flowers and swags, segmental pediment and corner urn


ceiling, top light with central glazed panel and ventilator
pendant; the canopy over the judge's bench has egg-and-dart
moulding, the dock and wooden fittings appear original;
gallery with cast-iron balustrade (flower motifs, wooden
handrail) and moulded tiles on rear wall.
The former Civil Court, now No.2 Court (NE corner), fitted up
1863, has an inserted ceiling but paired pilasters and roll
mouldings visible in office above; panelled partitions in well
of court appear original, the bowed gallery front has moulded
balusters, flower and leaf motifs, moulded wooden handrail,
stepped bench seating.
The former Criminal Court, (?Crown Court) now Court No.1 (NW
corner): damaged by fire 1991, it has a fine carving of the
royal arms over the E entrance; interior not inspected.
Corridors lined with decorative tiles added 1877; cantilevered
stone staircases at the N and S ends of the W corridor and the
N end of the E corridor have cast-iron balustrade with moulded
wood handrails and elaborate cast-iron paired security gates
mid-way up. A staircase down to the basement on the E side of
the Hall is of 2 flights, with cast-iron openwork scrolled
panels and wooden handrail.
The remaining ground-floor rooms retain original features
including marble fireplaces, panelled window reveals,
plasterwork. A concealed spiral stair E of the S vestibule
rises through the full height of the building and has plain
square-section balusters; it is oval in plan.
Basement: the large room beneath the Victoria Hall has
cast-iron columns supporting the floor above, inserted
ceiling; the W side of the plan occupied by bridewell,
original cell partition walls at N end removed, steps up to
court room intact; centre: corridor original, rooms
partitioned; S end: some small cells remain under the entrance
colonnade area; they have substantial board doors and probably
date from the 1867 alterations to the front after the decision
was made to move the West Riding Court of Assize to Leeds. The
E side of the building is occupied by kitchens.
Main roof: innovative use of laminated wood beams, 12 each of
9" x 1 1/2" held by wrought-iron bolts, spanning the approx
22m width; thought to be the first example in wood, taken from
the designs of the Crystal Palace (Paxton 1850-51) and Kings
Cross station (Cubitt 1851-54).
HISTORICAL NOTE: a competition judged by Sir Charles Barry
gave the 1st prize to Brodrick, to design a Town Hall with
public hall, corporate offices and courts of justice; the cost
to be »35,000. Foundations laid 17 August 1855, the exact use
for all parts of the building still not clear; the contractor
was Samuel Atack. Problems arose from the architect's
determination to see the scheme through 'whatever the cost'


while Atack was unable to find an adequate margin of resources
and went bankrupt in March 1857. Contractors for the tower and
interior work were Addy and Nicholls. The Council made
alterations to the layout of rooms throughout the work. The
tower was added in 1856 after a suggestion by Barry, and in
1858 the clock was installed. The ventilator towers followed
extensive discussion and study and were copied elsewhere;
Barry, Hardwick and Paxton all visited the site while work was
in progress. The organ was installed in 1858 and was regarded
as the 'crowning glory'; town halls elsewhere followed suit.
The coal cellars were made in 1863 and painting and cleaning
throughout, including the Hall, took place in 1864. In 1867
Brodrick suggested that a larger skylight be put in each of
the courts. The final cost of the building was »125,000.
The arrangement of rooms reflects the 4 main uses to which the
Town Hall was put: i) police cells and offices in basement
area, S and W sides; ii) ground-floor court rooms for the
borough, criminal and civil courts in the SW, NW, and NE
corners with court rooms, jury rooms and other offices on
ground and 1st-floor corridors between; iii) the ground-floor
council room in the SE corner, with town clerk's offices,
mayoral and committee rooms on the east side ground and 1st
floors; iv) the central public hall, approx 49m x 22m and 23m
high with S gallery and N stage with apsidal recess housing
the organ.
The basement also housed the kitchens, (E side) and a public
meeting/refreshment room beneath the central hall, together
with boiler rooms and organ blowers. The south entrance with
elaborate vestibule was ceremonial while the north entrance
was for more official use.
(Cunningham, CJK (Leeds University): A study of Town Halls of
the C18 and C19 (PhD thesis): Leeds Univ PhD: 1974-; Linstrum,
D: West Yorkshire Architects and Architecture: London: 1978-:
376-77, 382).