Church of All Saints with Anchorage Attached 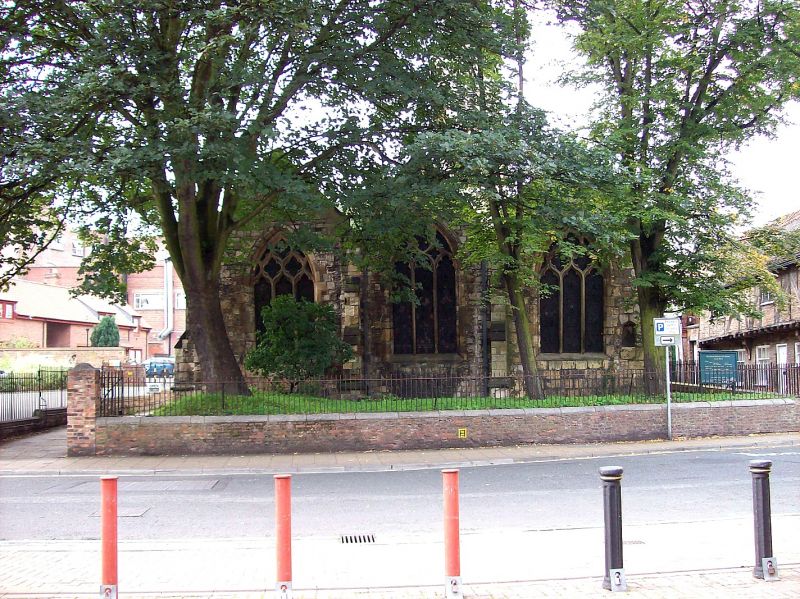 Entry Name: Church of All Saints with Anchorage Attached

stage, windows are of 2 lights in flattened 2-centred head;
those on third stage, transomed, of 2 lights. West windows to
north and south aisles are 2-centred, of 3 cinque-foiled
lights with one tier of panel tracery.
In all parts of the church, much window tracery has been
renewed.
Anchorage: one-and-a-half storeys; 1 bay north front with pent
half bay to west. Entrance is C20 board door to south of pent
bay. Full bay raised on arch-braced concrete deck, jettied on
north side with 4-light oriel window and coved eaves
surmounted by embattled cresting. Half bay has single light
windows to north and west, and bargeboarded eaves. All windows
are trefoil-headed square lattice casements, those in oriel
with carved panel tracery and risers carved with roses and
foliage.
INTERIOR: chancel: double-chamfered jambs of east window
original, incorporating carved demifigure at each side, at
springing point of inner chamfer. In chancel north wall,
square-headed aumbry of paired trefoil-headed niches. In
south-east corner 2 bays of C12 wall arcade survive, of
trefoil-headed niches on attached shafts with bell capitals,
in 2-centred arches separated by continuous band of dogtooth
moulding.
North and south arcades of 2-centred arches, either single or
double chamfered, some chamfers slight, some broad. Piers and
responds mainly octagonal, the easterly with square abaci,
hollow-chamfered underneath, the westerly with octagonal
capitals and square abaci with crudely broached angle stops.
Three piers earlier. One in north arcade is monolithic Roman
column shaft re-used with roll-moulded base and square abacus,
hollow-chamfered on under side; second one in north arcade is
cylindrical with necking, bell capital carved with nailhead
moulding and chamfered round abacus, on double roll-moulded
base. In south arcade, one pier is cylindrical with necking,
hollow-chamfered capital and square abacus, on water-holding,
double roll-moulded base. Third pier from east in north arcade
has tonsured demifigure corbel supporting a polygonal shelf on
west face. Tower arches are hollow-chamfered and die into
octagonal and half-octagonal piers and responds on square
bases with crude broach stops. In north wall beneath tower is
small pointed chamfered doorway leading to newel stair,
corbelled out over north-west corner. South doorway within
porch is pointed arch of one continuous order, roll-moulded on
each side of band of nailhead moulding. In west wall of south
aisle are two square chamfered openings, one blocked,
connecting with former anchorage.
Roofs. Chancel and three eastern bays of north and south
aisles have 6 trusses of arch-braced moulded principals on
angel-corbelled hammerbeams, with moulded collars and purlins,
and carved bosses. Wall plates finished with embattled
cresting. In north aisle, three corbels, wall posts and
chamfered wall plate survive from earlier roof.
STAINED GLASS: the Church is notable for containing the finest