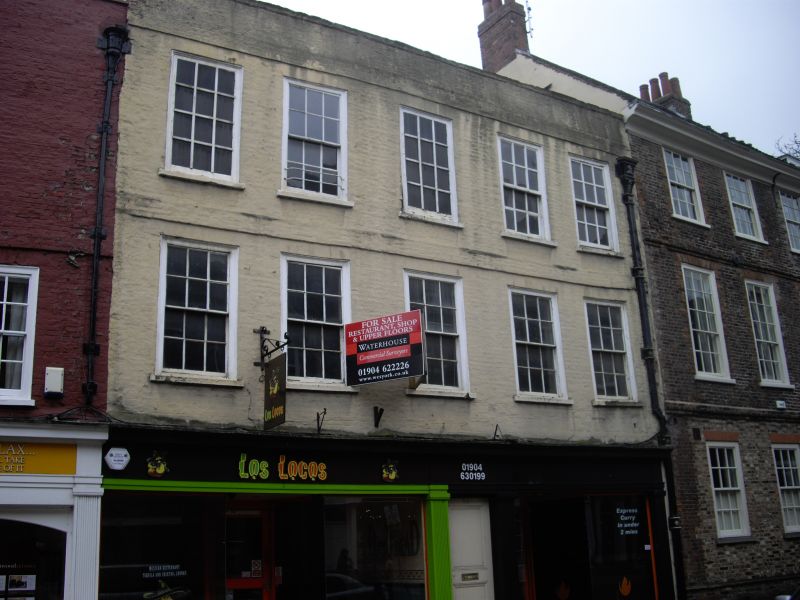 Two houses, now one shop. Early C17; largely rebuilt c1745;
further alterations and extension in C19 and C20. Mid C18
alterations for Rev Philemon Marsh, Rector of Church of St
Martin-cum-Gregory (qv).
MATERIALS: timber-framed, now encased in brick, in Flemish
bond, painted at front; plain parapet with stone coping masks
parallel roofs, gabled to street, each with brick stack at
rear; rear wing to No.69 has hipped slate roof; rear wing to
No.71 not visible.
EXTERIOR: 3-storey 5-window front. Ground floor of both
properties occupied by fluted pilaster and cornice shopfronts
with glazed doors recessed between half-canted plate glass
windows. All upper floor windows are 12-pane sashes beneath
painted flat arches of gauged brick with painted stone sills.
End and centre windows on second floor are blind. 1-course
raised bands at second floor and parapet levels. Original
rainwater goods at right end, with unicorn crest of the
Marshes on rectangular hopper.
Rear: No.71 has tripartite sash window with 16-pane centre
sash. Other window on first and second floors of both houses
have segmental arches. Rainwater head dated 1674.
INTERIOR: remnants of timber-frame visible on ground floor at
rear of both front rooms; and on first floor, in rear room of
No.71 which has possible studded partition wall.
Ground floor. In No.69, cantilevered staircase with column on
vase balusters and moulded swept-up handrail on turned newel
rises to first floor around full-height well. Well lined with
corresponding dado panelling and rail, and lit by lantern in
coved ceiling with moulded dentil cornice. Rear room has C17
panelling reset over C19 fireplace and on left and rear walls,
and moulded cornice. In No.71, single fluted pilaster respond
to former arch survives at foot of transverse staircase:
remnants of moulded and dentil cornices survive in both front
and back rooms.
First floor. Close string secondary staircase in No.69,
originally rising from ground floor, has turned balusters,
moulded handrail and square newels. At head of principal
staircase is keyed round arch on pilaster responds with
moulded imposts. Front room has moulded cornice and cased
axial beam. Rear room has door of 8 raised and fielded panels.
In No.71, close string staircase with stick balusters and
turned newel rises to second floor, boxed in below with
re-used C17 panelling and door forming under stair closet.
8-panel door leads to front room which has cased intersecting
axial and transverse beams carried on fluted Doric column.