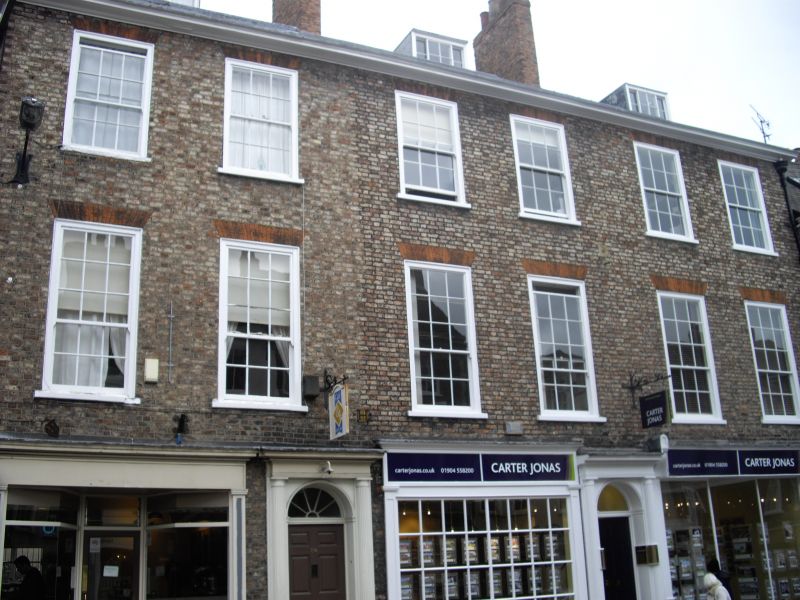 Formerly known as: Nos.78, 82 AND 84 MICKLEGATE.
Terrace of 3 houses, now shops and offices. c1822, with late
C19 and C20 shopfronts. By Peter Atkinson jnr. Pink and cream
mottled brick in Flemish bond at front and English garden-wall
bond at rear, with red brick dressings; timber eaves cornice
at front; to slate roof with three brick stacks rising through
front and rear roof pitches.
EXTERIOR: 3 storeys and attic; 6-window front. Shopfront to
No.78 incorporates renewed plain pilaster doorcase to No.80,
with 6-panel door and fanlight; to left, plate shop glass
windows flank three-quarter glazed door. Shopfronts to Nos 82
and 84 are separate from original doorcases of slender fluted
columns, round-arched fluted architraves, plain friezes and
moulded cornice hoods; doors, approached by moulded stone
steps, are of six raised and fielded panels beneath fanlights,
plain to No.82, radial to No.84. Windows on upper floors are
sashes, of 15 panes on first floor, 12 panes on second floor,
all with painted stone sills and flat arches of gauged brick.
Attic windows are flat topped dormers, with sliding sashes to
Nos 80 and 82, casements to No.84.
Rear: two tall round-headed radial glazed staircase sash
windows, third one altered. Other windows are 12-pane sashes
with painted stone sills. All windows have arches of brick.
INTERIOR: Nos 82 and 84 each has an open string staircase from
ground to third floor, with stick balusters, shaped treadends
and moulded handrail wreathed at the foot around a turned
newel on shaped curtail step. Round stairhall arch on sunk
panelled pilasters with moulded imposts. Doorcases are reeded
with angle blocks. Ceiling cornices reeded. Nos 78-80 not
available for inspection but thought to retain similar
features.
(City of York: RCHME: South-west of the Ouse: HMSO: 1972-:
127).