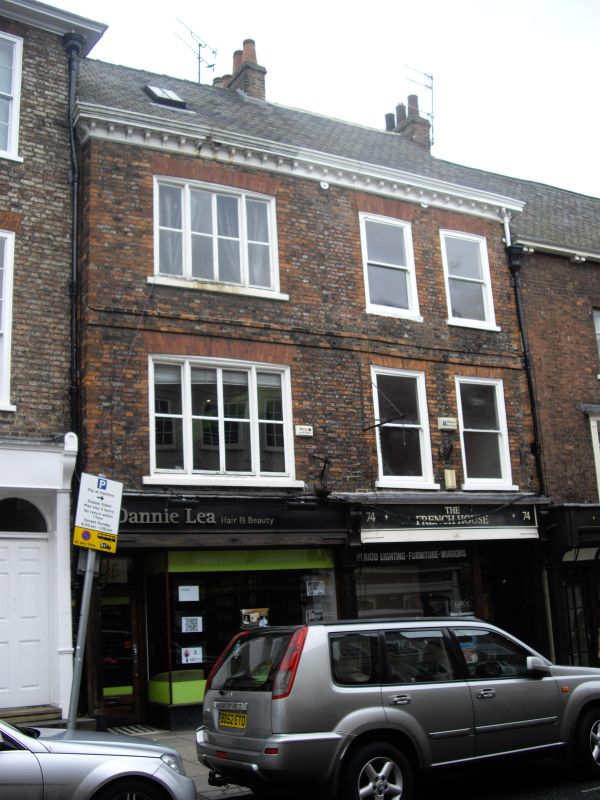 House, now shops and flats. Mid C18; subdivided, altered and
extended, and No.74 raised, in early C19; No.76 raised, with
further alterations and extensions in late C19 and C20; C20
shopfronts.
MATERIALS: front of brown mottled brick in Flemish bond, with
orange-red brick dressings; timber console cornice to slate
roof, with central brick stack. Rear of No.74 in orange-red
brick in irregular bond to second floor level, mottled brick
above; No.76 extended in dark brick in English garden-wall
bond.
EXTERIOR: 3-storey 2-bay front, with two windows to No.74 and
one to No.76. Paired shopfronts of sunk panelled pilasters,
deep fascia, with blind boxes, beneath moulded cornice on
grooved consoles, and three-quarter glazed doors and plate
glass windows. No.74 has 1-pane sash windows on first and
second floors, with painted stone sills and flat arches of
gauged brick, that on second floor renewed. No.76 has 4-light
casement windows with painted stone sills and renewed cambered
arches of gauged brick. Raised band at second floor level.
Rear: paired 3-storey 1-window gabled wings; No.74 has 16-pane
sashes, No.76 4-pane sashes.
INTERIOR: No.74 has close string staircase from ground to
second floor, with stick balusters, shaped treadends and
swept-up moulded handrail. Room to rear has reeded cornice. On
first floor, doorcases are reeded with angle paterae, and room
at front has reeded cornice. No.76 has late C19 close string
staircase from ground floor to attic, with turned balusters,
square newels and moulded handrail. First floor front room has
marble fireplace with plain pilaster jambs, mantelshelf on
consoles and late C19 tiles. Moulded cornice.
(City of York: RCHME: South-west of the Ouse: HMSO: 1972-:
81).