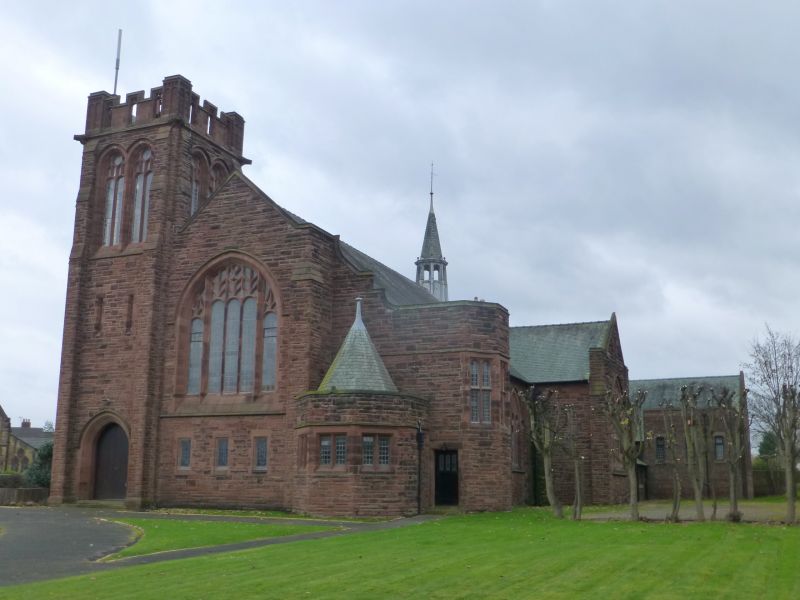 Presbyterian church, now United Reformed Church. 1904-5, by WG
Fraser and A Thornely. Snecked red sandstone in large blocks,
green slate roofs.
STYLE: Free Perpendicular.
PLAN: nave on north-south axis with short chancel, east and
west transepts, north-east tower and north-west stair-turret
and cloakroom.
EXTERIOR: the square 3-stage tower, with angle buttresses, has
a 2-centred arched west doorway with double-chamfered surround
and a hoodmould, 2 small lancets to the 2nd stage, tall
coupled round-headed 2-light windows to the 3rd stage and a
stepped and pierced embattled parapet. The gable of the nave
has 3 small rectangular windows below a large 2-centred arched
window of 1:3:1 lights with free tracery in the head, and
gable coping carried round as a parapet which is then stepped
and ramped down to the stair-turret. The latter, designed as a
set-back 2-storey wing with 3-sided west end, has a doorway in
the north side and tall cross-windows in the end; and in the
angle is a polygonal single-storey cloakroom which has
mullioned 2-light windows, a parapet and steep polygonal slate
roof with a finial.
INTERIOR: narrow transverse passage-aisles, with moulded
2-centred arches on octagonal columns; wooden wagon ceiling;
west gallery; good First World War memorial window in chancel.