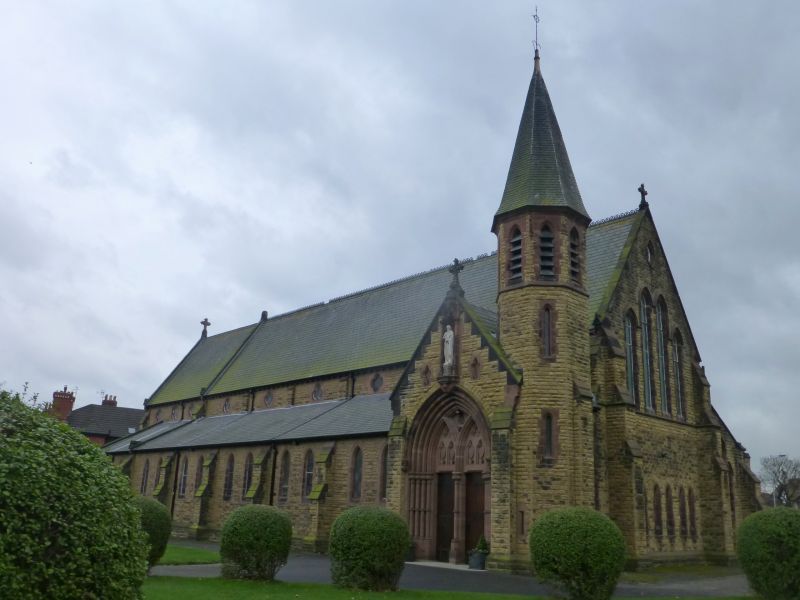 Roman Catholic church. 1885-6, by AE Purdie. Sandstone rubble,
slate roofs.
STYLE: Early English.
PLAN: nave, north and south aisles with porch and turret at
west end of north aisle, diagonal porch and apsidal chapel at
west end of south aisle, 2-bay chancel with north and south
aisles.
EXTERIOR: the 5-bay nave has pilaster-buttresses and one
quatrefoil clerestory window in each bay; its buttressed west
gable has 5 lancets to an internal narthex, a west window of 4
unequal lancet lights, a spherical-triangle in the gable and
gable coping with an apex cross. Attached to the north-west
corner is a large full-height gabled porch with a tall
octagonal bell-turret embraced by its west corner: the porch
has a large 2-centred arch with shafts and 4 orders of
moulding and a traceried tympanum over a pair doorways, and
the turret has staggered lancets (presumably to a spiral
staircase), louvred belfry lancets and a slated spire with
swept eaves. On the south side an apsidal chapel projects from
the 2nd bay of the aisle, and the west angle with this is
filled by a diagonal porch which has a doorway in similar but
simpler style to that of the north porch, and an embattled
parapet. The full-height chancel has a stepped triple-lancet
east window.
INTERIOR: aisle arcades of cylindrical columns with moulded
caps, and moulded 2-centred arches; arch-braced scissor-truss
roof with wind-braced purlins, carried on short wall
colonnettes with carved caps; 3-bay arcaded west narthex, and
gallery over this with brattished coping; tall 2-centred
chancel arch with clustered shafts and moulded arch; 2-bay
chancel with 2-bay north and south arcades, elaborate carved
marble and alabaster reredos.