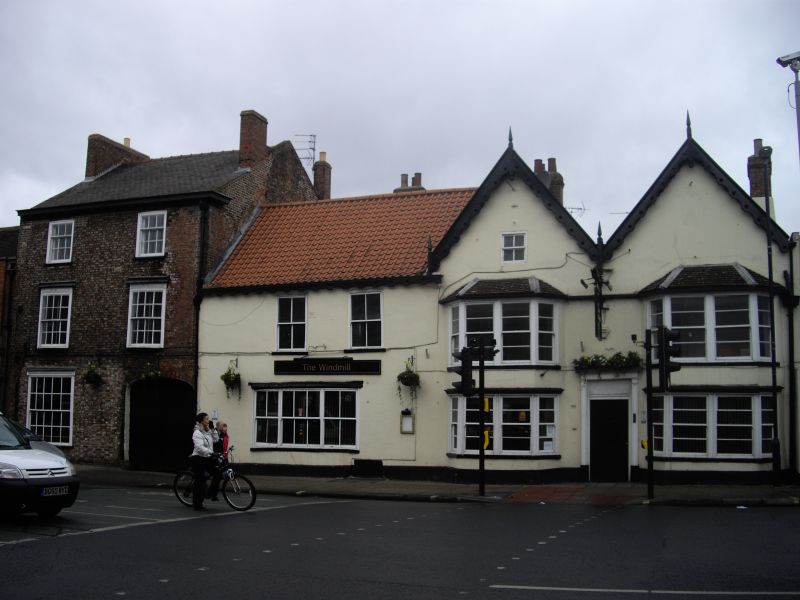 Formerly known as: Windmill Inn BLOSSON STREET.
Inn. Late C17, mid C18 and early C19, with alterations in the
late C18, early and mid C19, and additions c1890. Remodelled
1994. Brick, partly rendered, with some timber-framed internal
partitions. Roofs pantiled and slated.
PLAN: the earliest block, at the north-east on the corner of
Blossom Street and Queen Street, has 2 parallel roofs with
gables facing Blossom Street. To the south, also facing
Blossom Street, is an addition probably built shortly after
1735. No.16 adjoins to the south and is of c1820, with exposed
brickwork and a slate roof. To the rear is a stable range of
similar date. A parallel range of c1890 borders Queen Street
and encloses the opposite side of the rear yard.
EXTERIOR: the north-eastern block has two 2-storey canted bay
windows facing Blossom Street. They have plain tiled roofs and
sashes which are divided horizontally by glazing bars. Above
the left-hand one there is a small sashed window within the
gable. The gables have finials and scalloped bargeboards.
Between the bay windows on the ground floor there is a
doorcase with panelled pilasters. The mid C18 addition to the
south is of 2 storeys. On the ground floor it has a bowed
window with 3 sashes and on the 1st floor it has 2 sashed
windows. No.16 is of mottled brick, 3 storeys and 2 bays. On
the 1st floor there are bowed glazing bar sash windows with
panelled friezes. On the 2nd floor there are glazing bar
sashes. At the left on the ground floor there is a late C19
timber shopfront with 3 pilasters, and with brackets to each
side of the fascia. The partly-glazed door is C20. At the
right there is a carriage entrance with elliptical arch and
double timber doors. The modillioned timber cornice gutter has
a lead hopper and downpipe at the right. Chimneys on gables of
No.16 (the 2 to the right in front of and behind the ridge),
towards the rear of the left-hand ridge of the NE block, and
on the right-hand return wall to Queen Street.
INTERIOR: not inspected.
(RCHME: City of York: South-west of the Ouse: HMSO: 1972-:
62).