A Grade I Listed Building in Nettlestead, Suffolk 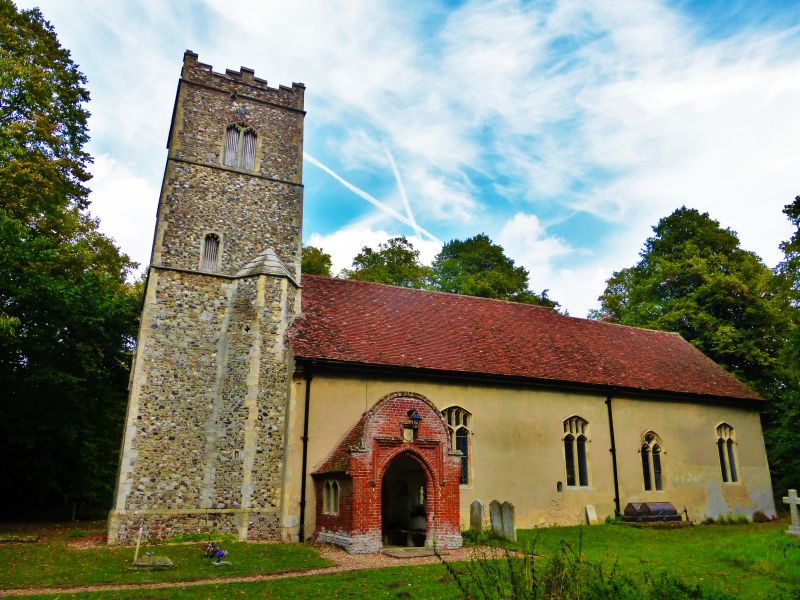 NETTLESTEAD HALL LANE
TM 04 NE
6/127 Church of St. Mary
9.12.55
- I
Parish church, mainly of c.1500 but with core of C12 and later. Nave,
chancel, west tower, south porch. Flint rubble, rendered apart from the tower
which has much moulded stone reused as rubble. Freestone dressings.
Plaintiled roof. A C12 slit window in the north nave wall has unusual
interlace enrichment around the head; another similar but plain window in the
south wall. A piece of reused freestone in the tower stair-turret is said
also to have C12 carving. The east end of the church was severely bomb-
damaged in 1940, but the present window is probably a repaired C19 window, in
turn a remodelling of the mediaeval window existing in this form in c.1850.
It is in the late C13 manner, with nook shafts inside and out, and flanking
image niches on the inner wall-face. A blocked moulded north doorway and a 2-
light window in south chancel are of c.1400. Major alterations of c.1500
include: shortening of west end of nave and erection of tower, the embattled
parapets bearing a shield in the centre. Belfry openings with damaged
tracery. Several 2-light windows in nave and chancel. Inner south doorway
enriched with Tudor flowers and with original plank aoor. Roof in 7
uninterrupted bays, canted and plastered, with moulded knee-braced tie-beams
and cornice; a stud-and-plaster partition marks the rood position and the
doorway and stairs to the loft also survive. The porch was added in red
brickwork c.1630, with semi-circular parapet gable and 2-centred arched
doorway (the latter rebuilt C20 but formerly stuccoed). The head is labelled
and bears a shield of limestone with the arms of Wingfield impaling Poley
(c.p. porch of Watering Farmhouse, believed occupied by Thos. Wingfield
d.1632). The side walls have twin windows and oak benches. Fine early C15
limestone font: the octagonal bowl has St. Catherine and the emblems of the
Evangelists, supported by angels, ana the stem has buttresses and lions sejanc
at each corner. Octagonal early C17 pulpit, enriched with arcading and
strapwork and standing upon a C19 limestone base; the original sounding-board
was surviving in 1909. C19 choirstalls have 8 fine bench-ends of c.1500, with
poppyheads and animal and angel figures on the buttresses. An alabaster wall
monument, partly painted, to Samuel Sayer (d.1625) and his wife Thomasine
(d.1647) with busts and achievement. Another monument with lost inscription
has a helmet above. Both severely damaged and depleted. A floor slab in the
nave has the brass of a knight of c.1500 (inscription missing), believed to be
of the Wentworth family. A floor slab in chancel to Thos. Wingfield (d.1632)
and his wife Alice (d.1629); two others of 1678 and 1696. A painted coat of
Arms of George IV on nave wall.