Balustrade with four lamp-standards in front of Richmond Terrace 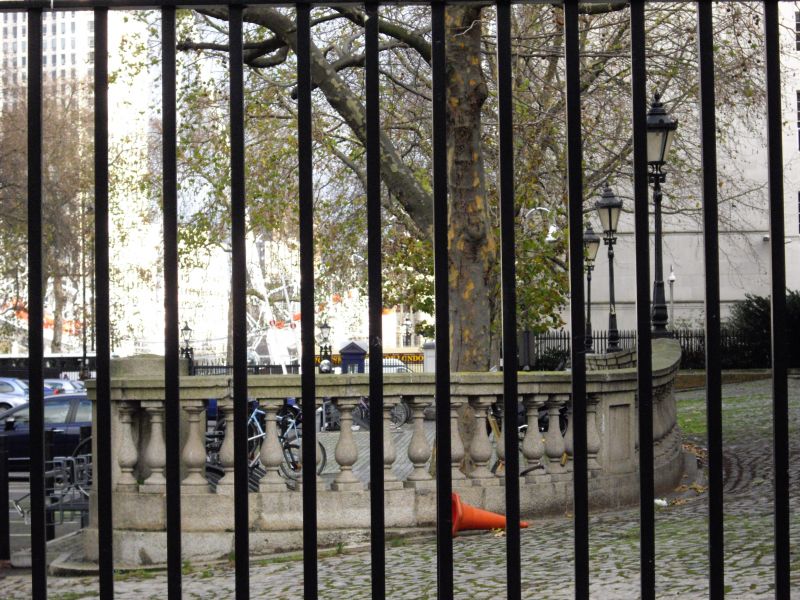 Balustrade and retaining wall with four lamp standards, part of a development designed 1819 by Thomas Chawner and built 1822-4 by George and Henry Harrison.

Balustrade and retaining wall with four lamp standards, part of a development designed 1819 by Thomas Chawner and built 1822-4 by George and Henry Harrison.

DESCRIPTION: this structure forms the northern retaining wall to a ramped carriage drive running the full length of the terrace. It comprises a long granite balustrade, curved into scrolls at the extreme ends, and formed of groups of balusters alternating with square piers. The four central piers are surmounted by cast-iron lamp standards with Neoclassical ornament, ladder bars and finialed Nico lanterns.

Richmond Terrace was built in 1822-4 on the site of a house formerly belonging to the Duke of Richmond. The new terrace, comprising eight large town-houses of the first class, was developed by the Commission for Woods and Forests and designed by the latter's architect Thomas Chawner. The building work was carried out by the Westminster builder George Harrison, with design input from his architect brother Henry. The terrace faced north onto its own landscaped forecourt, screened from Whitehall by iron gates and a small entrance lodge (now demolished). The present balustrade formed the retaining wall to a ramped carriage drive which gave direct vehicular access to the front doors of the houses. Having been spared from complete demolition as envisaged in Leslie Martin's 1964-6 Whitehall masterplan, the front part of Richmond Terrace was eventually incorporated into a large new government building known as Richmond House, designed by Whitfield Associates and built in 1982-6.

The balustrade and lamp standards in front of Richmond Terrace, part of a development designed 1819 by Thomas Chawner and built 1822-4 by George and Henry Harrison, are listed at Grade II for the following principal reasons:

* Architectural interest: the balustrade forms part of the architectural setting for Richmond Terrace, a particularly grand palace-fronted terrace of the late Georgian period;
* Planning interest: Richmond Terrace was a development of an unusual type, comprising a free-standing terrace facing its own landscaped forecourt, of which the balustrade and lamps were a key visual and functional element;
* Historic interest: part of an extremely prestigious development at the heart of London's government district, inhabited during the C19 and early C20 by various important figures in politics and finance;
* Rarity: a rare example of a group of lamp standards dating from the early C19;
* Group value: with the Terrace itself, as well as with the rich assemblage of nearby listed buildings on and around Whitehall, especially the former War Office opposite.