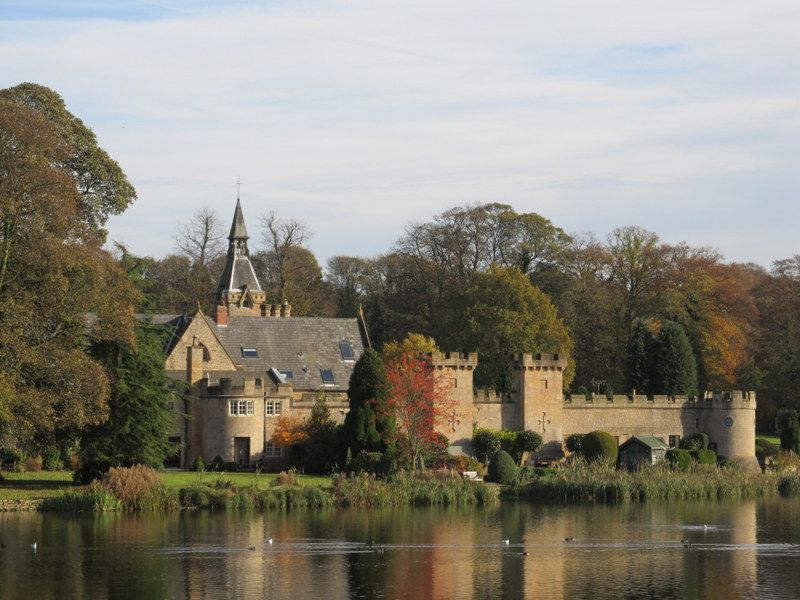 NEWSTEAD NEWSTEAD PARK
SK 55 SW
1/105 The Fort, Fort
Lodge and Monk's
Laundry
13.10.66
G.V. II
Mock fort. Now 3 dwellings. c.1770 and mid C19. Built for the
fifth Lord Byron. Coursed and squared rubble, dressed stone and
ashlar. Gothick style. Chamfered plinth, moulded string course,
crenellated parapet with machiolations. Single coped gable.
Single ridge and external corner stacks. Single and 2 storeys,
7 bays. Windows are C20 casements. West front has off-centre
blocked entry flanked by single square towers with crosslets. To
its left, double French window flanked by single round bosses and
beyond, single casements. To left again, round tower with
glazing bar casement, flanked to left by a door and to right by
mullioned casement. To left again, a similar casement. To
right, 3 casements and French window alternating with 3 round
bosses. Round corner tower. Above, to left, 4 mullioned
casements. Square towers have each a square blank panel. To
right, a casement and in corner tower, 3 round windows. South
side has projecting central square bay with triple lancet and 4
blank circles. To left, 2 casements and a round boss. To right,
a pointed archway. This building is one of two mock forts built
alongside the lake and used as a setting for mock naval battles.