A Grade I Listed Building in Calverley and Farsley, Leeds 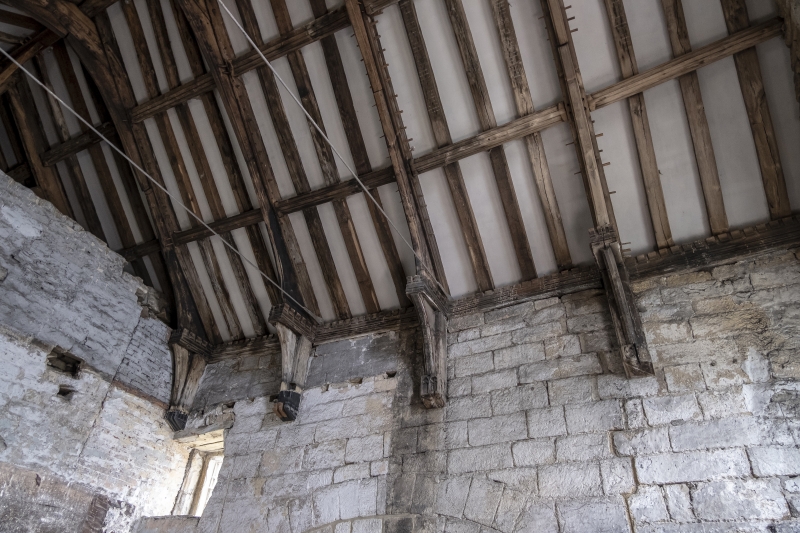 Interior continued: much fine timber-work survives: Great Hall 6-bay hammer-beam
roof with moulded arch-braced trusses and purlins with hammer-beams and planks
concealing the wall-plate both ornamented with bratishing, possible spere-truss
(over site of screens passage has), of unusual form: single 'A' strut king-post
truss with a 'V' strut crossing in the form of a St Andrew's cross. Large 'A'
strut closing truss. 4-bay chapel roof similarly treated but with plain panels
or with oak planks applied to underside of rafters with thin ribbed members;
2 bays open, other 2 bays have floored gallery with full-height railings with
moulded balusters and cross members similar in treatment to a mullioned-and-
transomed window with, to meeting with truss, Gothic fretted panels. 4-bay solar
of post-and-truss construction with moulded tie-beams and richly-carved spandrels
principals and roof renewed but containing many medieval re-used timbers.
L-shaped dining room of West Chamber block has fine richly-moulded coffered
ceiling and Tudor-arched fireplace with moulded surround.

The seat of the Calverley family up to c1700. A gentry house with a fine late
medieval hall, solar and chapel and as such very rare within the county and of
considerable importance. Owned by the Landmark Trust.