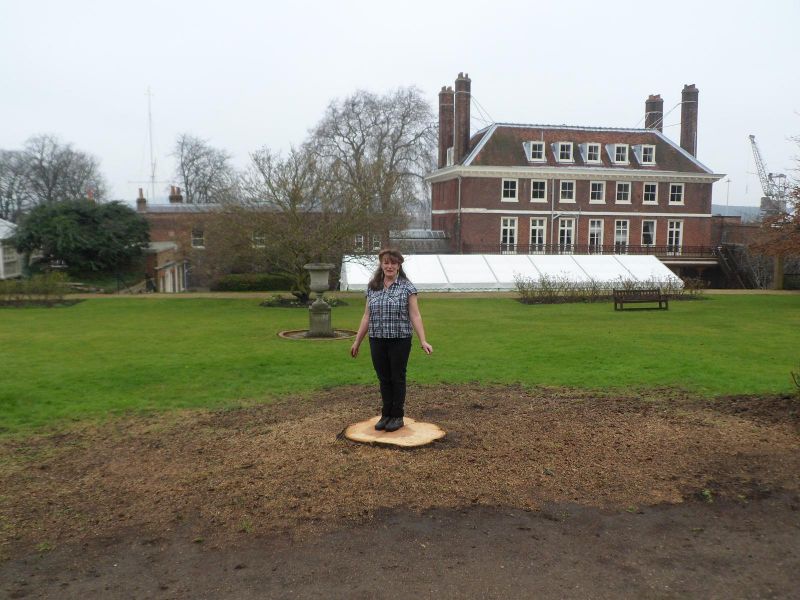 EXTERIOR: Three storeys, basement and attic; seven-window range. A symmetrical front has stuccoed basement, plat bands to each floor, and a deep modillion eaves cornice all round. A mid-late C19 central timber porch bridging the basement area has a deep canopy and steps up to the entrance, with plate-glass sashes each side; rubbed flat brick arches to late C19 plate-glass sashes in exposed boxes, 2/2-pane second floor sashes, and five 2/2-pane dormer sashes.
Rear elevation has first-floor French windows and a mid C19 full-width cast-iron verandah with curved brackets and railings and steps down at the end. Right-hand single-storey, three-window right-hand kitchen extension with parapet.

Right-hand staff accommodation and kitchen, a two-storey; eight-window range, with timber doorcase one bay from the left with pilasters to an entablature and six-panel door; cambered heads to 6/6-pane sashes in exposed frames, alternate blank openings on the second floor two, five and seven from the right.

INTERIOR: has a large full-depth entrance hall with full bolection-moulded panelling to a fine open well stair with three column-on-vase balusters per tread, curtail, and ramped moulded rail, richly moulded brackets, and a painted ceiling of Neptune crowning Mars by Sir James Thornhill, reported to have come from HMS Royal Sovereign, launched 1701; elliptical-arched doorways, left-hand ballroom has plaster panels, dado, fluted Corinthian pilasters, enriched bracketed cornices to doorways, and lavatory with Delft tiles and original basins. Full-width first-floor former office. Service stair to the right of the entrance at the front has turned balusters. The staff accommodation has a dogleg stair with stick balusters from the entrance hall.

HISTORY: the oldest intact building in any naval dockyard, distinguished by a remarkable complete interior. Built for Commissioner St Lo, the resident Commissioner, on the site of the earlier Commissioner's house, at the beginning of the early C18 rebuilding, possibly to his own designs and carried out by dockyard labour. The right-hand extension was for the Commissioner's staff and barge crew. Part of a fine assemblage of Georgian dockyard buildings.