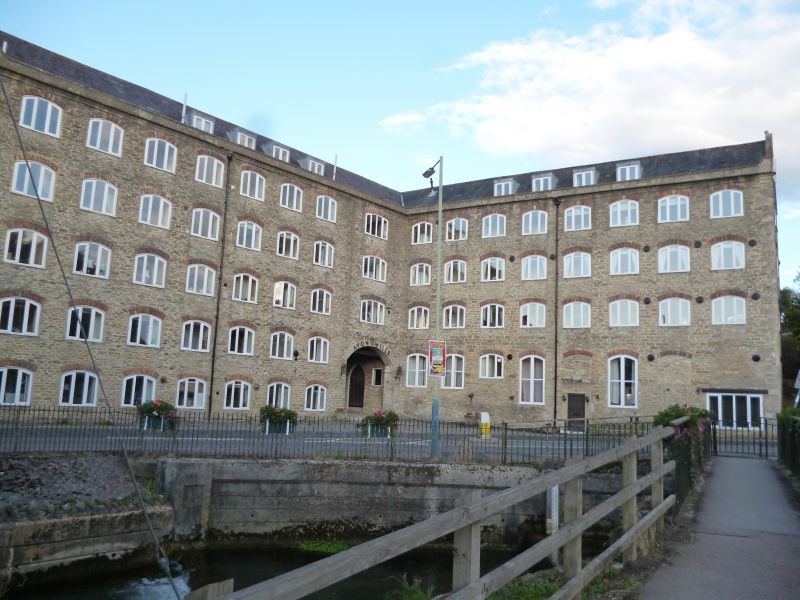 Woollen mill, now flats. 1790 for Francis Hill, converted
1984. Limestone rubble with ashlar and brick dressings and a
slate roof.
PLAN: L-shaped block of 2 single-depth ranges.
EXTERIOR: 5 storeys and attic; 8:8-window range. Plain,
regular ranges with coved cornice and ashlar parapets ramped
up at the ends, coped end gables, with 1-window linking
section to the E end of the N block containing a
segmental-arched through carriageway with key and imposts.
Brick segmental-arched heads to C20 3-light casements, some
blocked, 4 dormers each; C20 doorway in the S block 5 bays
from the archway with lower flanking windows, a 2-centre
arched doorway in the right-hand side of the carriageway, and
a round-headed doorway in the rear elevation of the N block 4
bays from the archway.
The S block built into the hill behind, which has a similar
elevation with a continuous dormer to a flat-roofed end
section over the corner.
INTERIOR: not inspected, but reported to be largely late C20.
HISTORICAL NOTE: originally called Burton Hill Mill, enlarged
1803, converted to steam power 1838. Other uses include a corn
mill c1825, and silk mill c1850.
(Victoria History of the Counties of England: Crowley DA:
Wiltshire: 1991-: 146).