A Grade I Listed Building in Malmesbury, Wiltshire 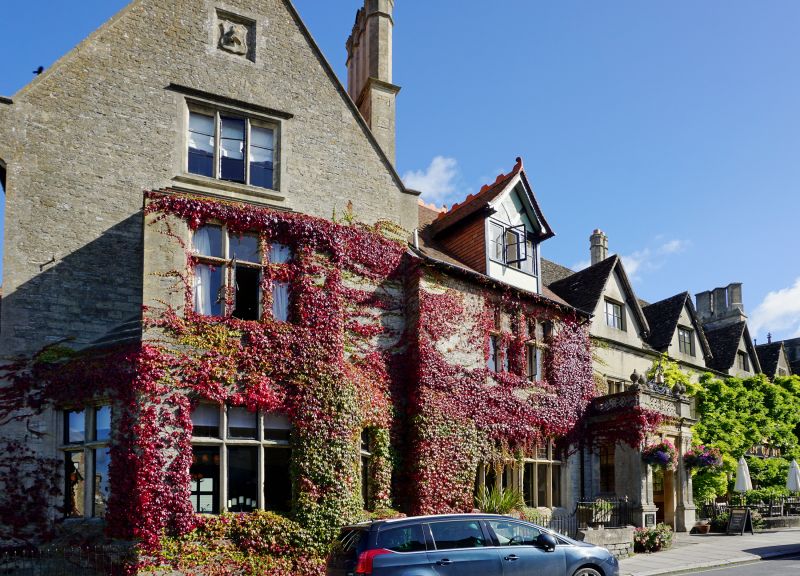 INTERIOR: details include a very fine c1220 ground-floor
ashlar fire hood, restored c1980, with on the first floor
above, the moulded jambs with capitals of another C13
incomplete fire-surround; to the right of the lower fireplace
are 2 stone steps of a former winder stair. First-floor
central room has a late C15/early C16 compartmental ceiling
with deeply-moulded beams; roof partly obscured, the C17 E
dormers are cut through large trenched purlins. C20 entrance
to the W extension has black marble shafts to paired round
arches within a semi-circular relieving arch. Late C20 stair.
A fragment of wall painting is reported either side of the
attic fireplace to the central chimney, with red feather and
scroll friezes, possibly part of a larger C13 scheme of wall
decoration.
SUBSIDIARY FEATURES: Attached dwarf walls with iron railings
to front areas, and piers with ball finials to W end.
HISTORICAL NOTE: Probably built by Abbot Loring (Abbacy from
1208-1224), on the site of and re-using material from the old
Keep built by Bishop Roger c1130, and demolished in 1216. A
reported vaulted cellar beneath the lounge contains 8 stone
coffins. The ashlar fire hood may be the earliest
domestic-style ground-floor fireplace, served by a flue, in
England. At the time of Dissolution, the house was probably
that referred to as the Steward's Lodging. Bought after the
Dissolution by William Stumpe, (see Abbey House, qv) and used
for cloth mill, though with little alteration.
(Stirling D: Secular medieval buildings in Malmesbury, Wilts,
1150-1547: 1986-: 12; Victoria History of the Counties of
England: Crowley DA: Wiltshire: 1991-: 157).