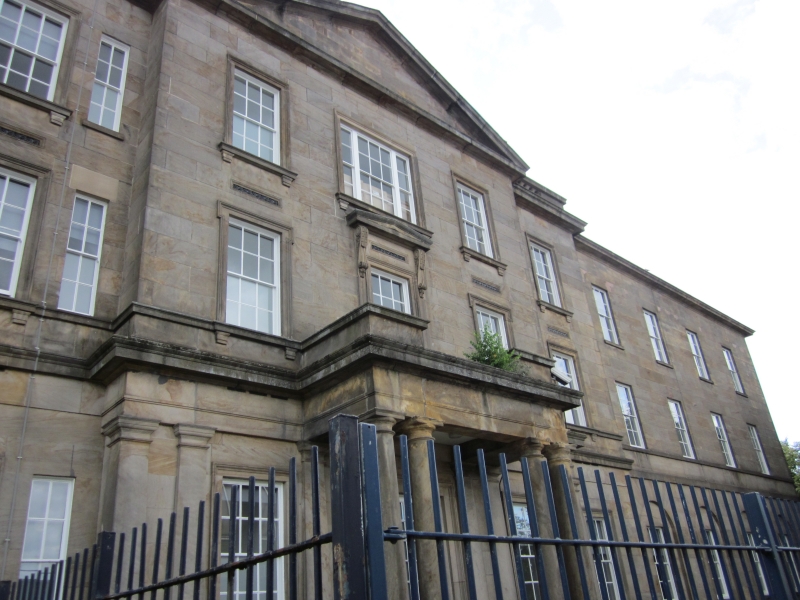 Infirmary, now offices. 1793-97. By John Rawsthorne.
South-east return wing in the same style, 1883-84. By John
Dodsley Webster. Restored and with alterations c1988. Ashlar
with ashlar dressings and hipped slate roofs with 5 truncated
ridge stacks.
EXTERIOR: ground and first floor sillbands, string course,
cornice and blocking course. 3 storeys plus basements; 13 x 13
windows. Windows are mainly 12 pane sashes. Slightly
projecting centre, 3 windows, with pediment containing clock.
Central window with moulded surround and cornice on brackets.
On either side, wings with 4 windows. Projecting hipped end
pavilions with 3 storey bow windows with lead semi-domes.
Central windows have moulded surrounds and cornices on
brackets. Second floor windows are 6-pane sashes. Ground floor
has central 4 columned Doric portico with dentilled cornice,
covering a glazed door with overlight, flanked by niches with
figures. On either side, a round-headed recess with a sash.
Beyond, on either side, 4 similar recesses with sashes. Bow
windows have pedimented central windows flanked by single
sashes.
Return wing, to left, has a centre projecting in 2 steps, with
pediment and parapet. Central first floor window has pediment
on scroll brackets. Central second floor window is a
tripartite sash. All the windows in the centre have moulded
surrounds. Flanking wings have four 12 pane sashes. 4 column
Doric portico has cornice and shaped blocking course. Ground
floor has on either side 4 round-headed recesses, each with a
12 pane sash. Right return has 4 windows on each floor, the
ground floor windows in round-headed recesses.
Main block rear elevation is similar to the front, with
pediment containing clock. Central first floor window has
bracketed cornice and smaller splayed flanking lights. 4
column Doric portico with plain cornice, with C20 glazed
double door and overlight. On either side, a 12 pane sash in a
round-headed recess.
Wings have four 12 pane sashes on each floor. Right return has
projecting central block, 5 windows, with heavy cornice and
coped parapet. On the first and second floors, two 12 pane
sashes, then 2 small sashes, then another 12 pane sash. 4
column Doric portico with cornice and C20 glazed doors, with a
single 12 pane sash in each side. Returns have a single small
window on each floor. Wings have four 12 pane sashes on each
floor. Right end has a tripartite sash on each floor, the
first floor one pedimented, the second floor with a gabled
surround, the ground floor one with a cornice and Doric piers
in antis. Left return has 2 windows on each floor. Left end
has a tripartite sash on the first floor with a pediment, and
on the second floor a Venetian window. Ground floor has a
tripartite sash in a round-headed recess.
INTERIOR: main range has vaulted entrance hall with 2 Doric
columns to inner hall. Barrel vaulted lengthwise corridor has
pilastered walls and corniced doorcases. At either end, a
round stairwell with cantilevered oval winder stone stair with
iron stick balusters and ramped scrolled handrail.