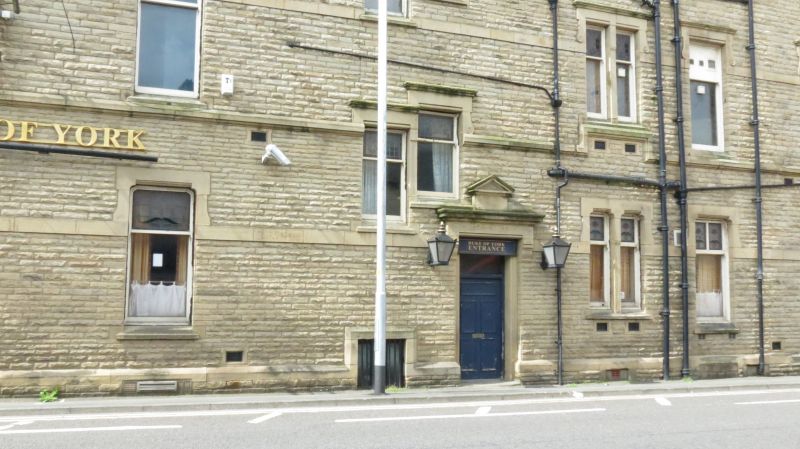 Hotel, now public house. Dated 1888 at 1st floor of west side;
altered. Coursed sandstone rubble with freestone dressings,
Cumberland slate roof. Jacobean style. Triangular plan on
acutely-angled corner site at junction of Colne Road and
Briercliffe Road.
EXTERIOR: 3 and 2 storeys over cellars, 6:3 windows
respectively plus a canted bay at the angled south end of the
2-storey portion; with a plinth, moulded sillband and impost
band to 1st floor, plain frieze, moulded cornice and plain
parapet (except the 2-storey portion which has no parapet).
The 5th bay of the main range has a large doorway in an
architrave composed of coupled pilasters with tall moulded
consoles and a dentilled cornice, above this a sunk panel with
raised lettering "DUKE OF YORK", a cross-window at 1st floor
with an enriched pilastered architrave and panelled crest
inscribed "1888", and a sashed window at 2nd floor breaking
the cornice; the 2nd bay has a shallow 3-light oriel at 1st
floor; most other windows are 2-light sashes with moulded
surrounds and mullions, those at ground floor with shouldered
lights and simplified cornices on consoles, those at 1st floor
with stilted heads and moulded cornices and those at 2nd floor
with raised sills on moulded brackets. Ridge chimney and gable
chimneys.
The 2-storey 3-window portion to the right has a large
tripartite architrave to windows of 2, 2 and one light at
ground floor, with pilasters and elongated consoles to a
cornice; at 1st floor an oriel with a moulded corbel, flanked
by single-light sashes; and at the south end a 2-storey canted
bay which has a clockface in a carved surround set in the
upper half of the central 1st-floor window. All these sashed
windows have square upper leaves, mostly retaining intricate
geometrical stained glass.
Rear (to Briercliffe Road) similar but simpler, including
doorways to both portions and staggered stair windows.
INTERIOR altered.
Forms a striking feature of the streetscape at this junction,
and groups with Church of St Andrew to the north (qv).