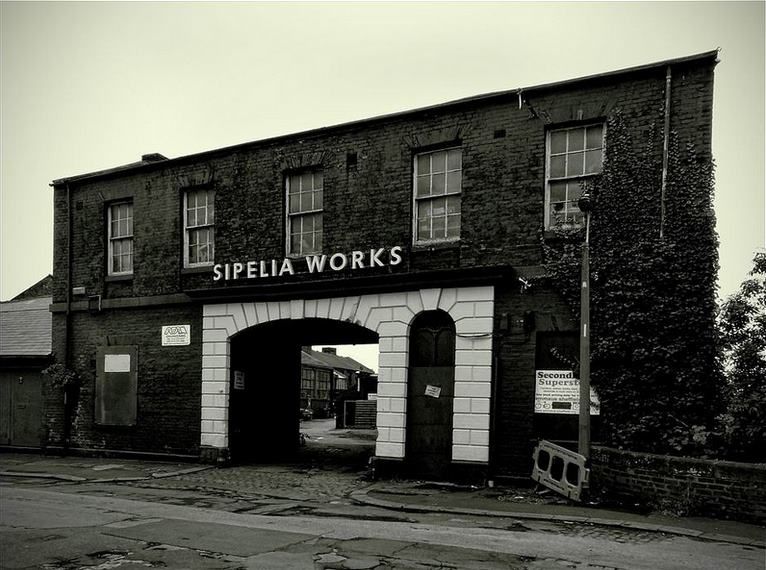 Steel works, now various workshops. 1850-55, with later C19
and C20 alterations. Built for Eyre, Ward & Co. Brick, the
front painted, and rock-faced stone, with stone dressings and
hipped and gabled slate and plain tile roofs. Long courtyard
with workshop ranges on either side flanking the canal to
north and Blast Lane to south, with transverse office range to
east.
EXTERIOR: office range has plinth and first floor band. 2
storeys; 5 window range of 12 pane sashes with brick flat
arches. Central segmental carriage arch with keystone, flanked
to right by a moulded 4-panel door with traceried round-headed
overlight, in a common rusticated corniced surround. To right,
a single window, boarded up. To left, a C20 casement. To left
again, a single storey building with 2 windows and a double
door.
Curved right return, to canal, has continuous rock-faced
ashlar basement and roll moulded string course. 2-storey
range, various builds, has to left regular fenestration with
various C19 and C20 windows arranged 2:3:4:5:7:2, many of them
blocked. To right, beyond a gap, a 2-storey range with 9
windows, then a range reduced to a single storey screen wall,
with 12 windows. Basement has a segment-headed off-centre
doorway with rusticated surround. The courtyard side, 2
storeys, has an off-centre blocked cart opening.
Left return has to left a 2-storey range with segment-headed
windows and to right, a taller single storey range, probably a
heavy forge, with 8 tall segment-headed windows, the left one
with inserted door, all reglazed C20. To right, a tall
carriage entrance with steel lintel. The courtyard side of
this range, formerly open, has round cast-iron columns and
brick infill with multi-pane glazing above. To right, a square
chimney base. Canal side buildings, probably light trades
workshops, have brick vaulted floors and multiple flues.
Basement contains storage rooms and engine and boiler house.
INTERIOR not inspected.
This building was erected as an extension of the nearby Sheaf
Works (qv) and is an example of the steel trades works of the
mid C19.