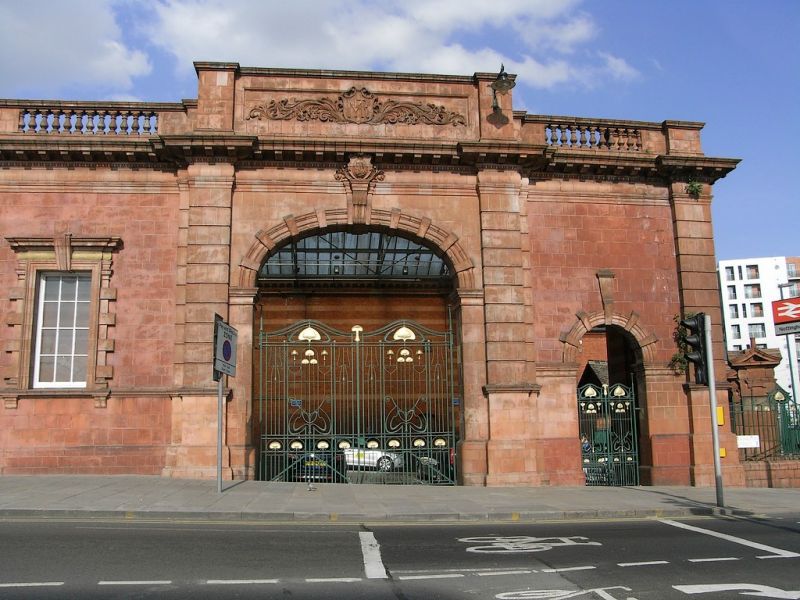 Shall be upgraded to:

Railway station. 1904. By AE Lambert and Charles Trubshaw for the Midland Railway Company. Constructed of a mixture of red brick, terracotta and faience (glazed terracotta) with slate and glazed pitch roofs over the main buildings. Neo-Baroque style.

The outside of the booking hall has polychrome bands and similar Baroque detail. 3 round-arched openings flanked by doorways, then by wider arched openings. Above, 5 round windows.

INTERIOR: the booking hall has glazed tiles, paired Doric pilasters, round-arched openings and round windows. Coffered ceiling with central glazed barrel vault. Diocletian end windows.
At the rear, a covered footway spanning the tracks, with a staircase and lift tower at each end.
Platforms 1-5 have mainly single storey buildings with Baroque detailing and round-arched openings with fanlights. 2 storey block, 10 bays, on platform 2/3. Continuous canopies with renewed sheet steel roofs and wooden valances, carried on riveted lattice girders and cantilever brackets. Riveted steel stanchions with cast-iron bases. Footbridge spanning platforms and tracks, with glazed cross-braced structure and roof. Platform buildings retain most of their original detail. The interior of the buffet on platform 4/5 has original terracotta
ornament, painted over, including pilasters, chimneypiece and
coved ceiling.
HISTORY: The third Midland Station to have been built in Nottingham. Built in response to the challenge made by the Great Central Railway and the facilities provided by its grand Victoria Statiion which opened in 1861 (now demolished). Having cost approximately £1M, the station was opended in to the public on 17 January 1904, although final completion not reached until later in that year.

This is an important and outstanding complex of railway station buildings and structures. The station has survived exceptionally well. The high quality of its Neo-Baroque architectutre, rare among English railway stations, and the importance of the American influence on its design, the first to exhibit this, add extra significance and make it of outstanding national importance.