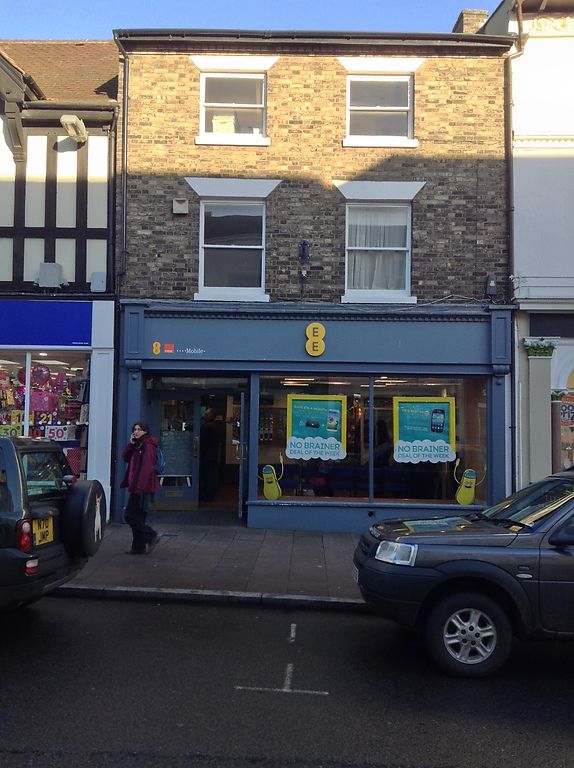 Commercial premises. Late C15/early C16 rear wing with C16 front range raised and refronted early C19. C20 alterations. Timber-framed with gault brick front and plain tile roof with truncated right end stack and tall stack to rear wing. L-plan with wing to rear right. Three storeys and cellar. 2-window range to first and second floors of 1/1 sashes with painted stucco lintels. C20 shop front. Rear has flat-roofed extension, various casements and doors and a part catslide roof linking with that of the rear wing.
INTERIOR. Timber-framing partly visible. The front range retains plastered bridging beams on the ground and first floors. Large wide flat joist visible on ground floor. Wallplate and purlin visible in rear of front range. Cellar has re-used C16 roll-moulded joists. C18 doors to both cellar and first floors. Early C19 stair to front range, part with stick baluster balustrade. Late C15 rear wing may originally have been an open hall for it has smoke-blackened plaster visible below clean C16 tie beam, above which is the C16 roof of wide coupled rafters with a C18 ridge inserted below.
This building has a good survival of C15 and C16 timber framing, is shown on Warren's map of 1776, and forms part of a significant group of historic buildings in the centre of the town.