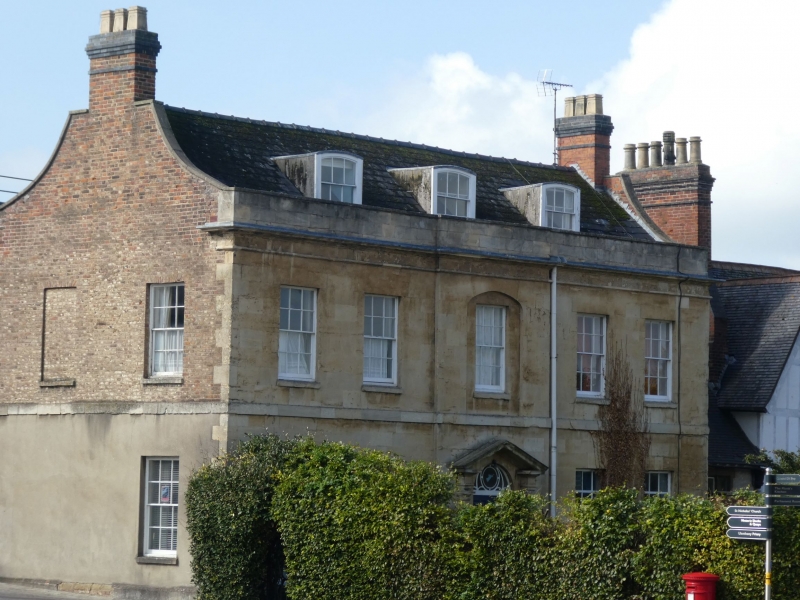 House. Incorporates C16 or early C17 structure, considerably
enlarged and remodelled 1807. Brick, partly faced in ashlar
and stucco, timber-framing mostly concealed, slate roof with
dormers, two brick stacks.
PLAN: double-depth block with wing at rear to right; the wing
is the remaining portion of the Sexton's House which faced
east, it now overlooks a walled garden at rear of the main
block; between the south end of the wing and the south flank
of the monastic precinct wall a short portion of a longer
timber-framed range now partly enclosed within the wing.
EXTERIOR: two storeys and attics with a cellar below the main
block; symmetrical front of main block faced in ashlar, of
five bays with a slight projection to the central bay; offset
plinth, band at first-floor level, frieze band and crowning
cornice with parapet above, raised quoins at the outer angles;
in the central bay a wide entrance doorway with semicircular
arched head containing fanlight of batswing pattern with metal
glazing bars, three stone steps to threshold, doorcase of
three-quarter Roman Doric columns, dosserets and an open
pediment, a six-panel (2x3) door with the upper four panels
fielded; on the ground-floor sashes with glazing bars (3x4
panes) in the bays on each side and on the first floor similar
sashes with the central sash set within a basket arched
recess, all in openings with flat-arched heads and projecting
sills; three roof dormers with segmental curved roofs and
sashes with glazing bars (3x2 panes).
At either end of main block a shaped and coped gable supports
a stack with crowning cornice and ceramic chimney pots. The
east gable-end wall stuccoed on the ground floor and the stone
band at first-floor level continued from the front, brick
above; to right on each floor a single sash similar to the
front sashes and on the first floor to left a blocked window
recess.
The rear wing, two storeys and attic; on the east side the
three southern bays of the former five-bay front of the
Sexton's House now faced in stucco and with timber crowning
cornice, on both floors sashes with glazing bars, 3x4 panes,
roof dormer.
INTERIOR: large central hall, an open well staircase to rear
with open string, curtail step, shaped tread-brackets, fluted

stick balusters and mahogany wreathed and swept handrail;
reeded architraves to doorways with corner blocks carved with
paterae; drawing room to left has early C19 joinery, moulded
plaster cornice with decorative ceiling frieze, and panelled
shutters; room to right has a plainer moulded cornice; the
principal room on the ground floor in the rear wing has mid
C17 small panel panelling and a late C17 fireplace with
surround of fielded panels and a raised keyblock in the
lintel.
From first floor to attic an early C17 dog-leg staircase with
moulded closed strings, turned balusters and toad back
handrail; first-floor room at east end of main block has early
C19 joinery; over the timber-framed bays at the south end of
the rear wing a double purlin roof with chamfered purlins and
inserted collars; doors in the attic are made up from salvaged
C17 and C18 panelling.
HISTORY: in late C17 this building was the Sexton's House.
(Eward S: No Fine but a Glass of Wine, Cathedral Life at
Gloucester: Salisbury: 1985-: 315-6).