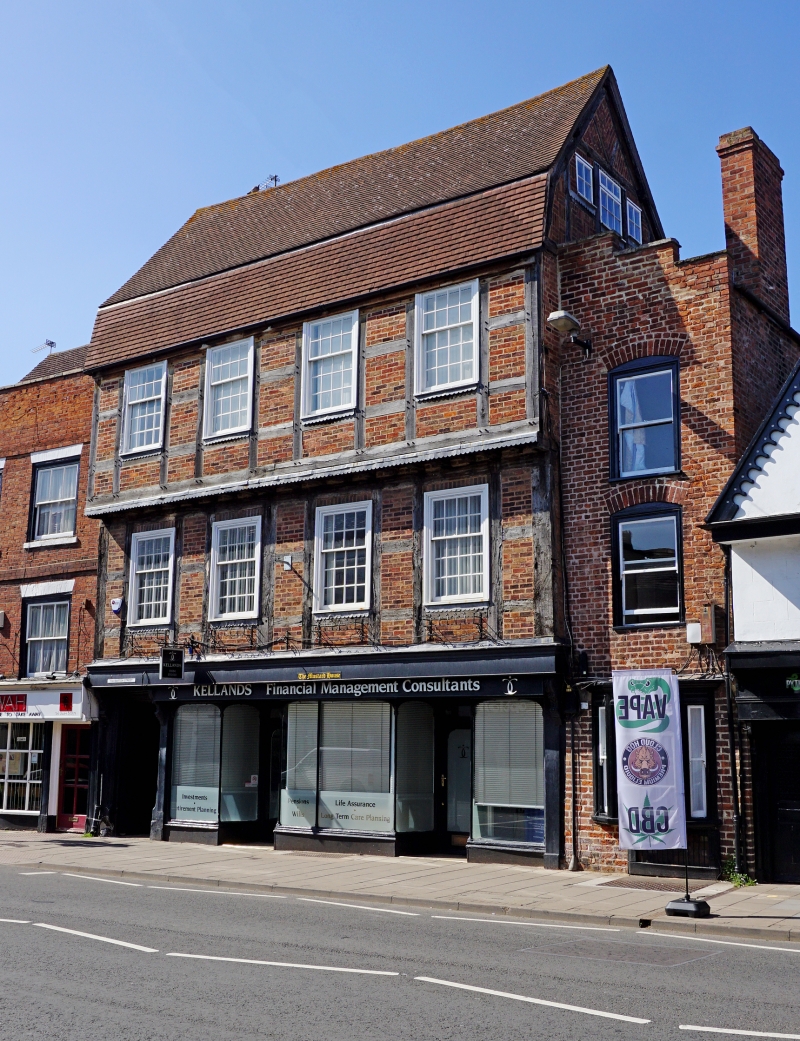 Pair of houses in row, now offices. C15 or C16 with C20
reconstructed frontage. Large panel timber-frame with brick
nogging, concrete tile roof.
PLAN: A broad frontage to parallel plan with 2 jettied storeys
and mansard roof, carried over a throughway to the left; the
frontage has been rebuilt, with new timbers, but the interior
retains substantial elements of the early framing, much of it
exposed in the interior renovation.
EXTERIOR: 3 storeys, attic and basement, 4-windowed. All
20-pane replacement sashes at first and second floors. The
ground floor has C19 double shop front with 2 recessed glazed
doors under transom-lights and small stall-riser, under
shallow fascia within decorative console brackets; to the left
is the opening to a throughway, with a further console
bracket. In the timbered gables are C20 casement lights. The
rear has twin gables which are lower than the main ridge, in
brick-nogged renewed framing above plain brickwork, with
various C20 lights. A further gabled wing to the right.
INTERIOR has unusually lofty rooms at each level. Ground floor
has been opened up, but retains in the right half a ceiling in
2 large compartments with good moulded plaster cornice. At the
back is a C19 plank door and an early cast-iron small-pane
casement. The basement has some stonework in the party walls,
and several recesses to flat pointed heads. 2 very large but
badly decayed chamfered beams remain.
Main staircase a C17 open well with square newels and twisted
balusters to a moulded solid string and moulded handrail.
Various heavy framing members throughout the building,
including large posts and a deep cambered tie. The front roof
has 3 pairs of upper crucks, facilitating easy access to a
probable former storage area.
The heavy restoration of the street front conceals a
substantial interior of historic interest here. The name is a
reminder of the earlier importance of Tewkesbury in the
production of 'mustard balls'.