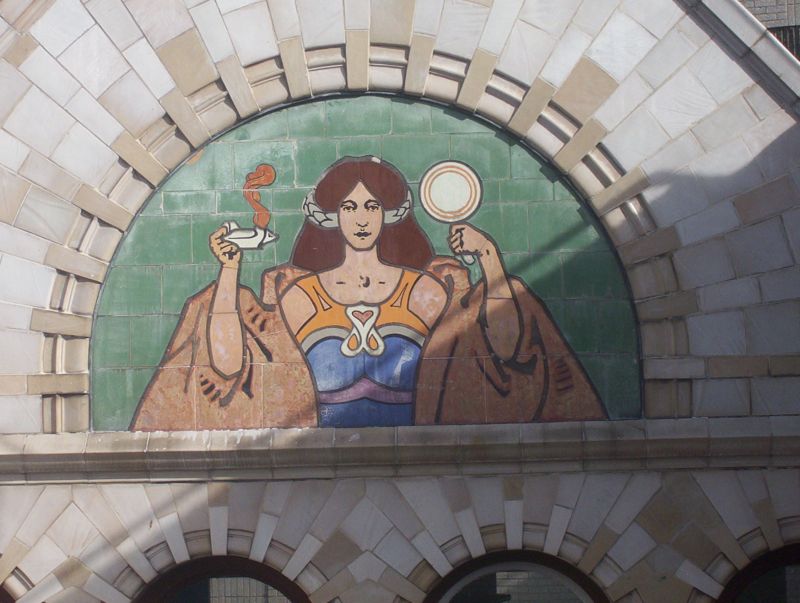 Printing works, now office. 1900-1, demolished behind c1970.
By Henry Williams, facade by WJ Neatby, Chief Designer for
Doulton and Co. For Edward Everard, printer. Polychromatic
'Carrara' marble-ware faience. Pre-Raphaelite style. 3
storeys; 4-window range.
A symmetrical gabled front has blue plinth to sill level,
white above with a thin ground-floor impost band, a wide band
over windows, first-floor impost band, crenellated parapet to
recessed second-floor windows between octagonal turrets with
cupolas, and moulded coping. A wide semicircular-arched
doorway has a blocked architrave and hoodmould, flanking
elliptical-arched windows, and a band above with coloured
stylised trees and hearts.
A pair of semicircular-arched first-floor windows with a
central octagonal column, square impost and coloured base,
EDWARD EVERARD in Art Nouveau lettering above the cills,
beneath decorative spandrel panels featuring Gutenburg (L) and
Morris (R) at presses with their respective alphabets, and an
angel reading in the middle. Behind the parapet is a
second-floor arcade of 4 semicircular arches with blocked
architraves, brown columns and imposts; the cupolas have
similar columns to a frieze of coloured hearts, with brown
domes and finials.
In the gable is a semicircular-arched panel with an
allegorical figure holding a lamp (Light) and scales (Truth).
An entrance lobby has a blue plinth, coloured dado, white
above to a frieze, and panelled plaster ceiling.
INTERIOR: completely rebuilt behind the facade. A timber fire
surround and terracotta hopper are mounted in the foyer.
Formerly part of a larger printing works by Williams in brown
terracotta, of which a further part survives in No.1 John
Street (qv). An important early use of glazed coloured
external ware to propagate Arts and Crafts ideas of the
reconciliation of art and industry, in the largest decorative
facade of its kind in Britain.
(Crick C: Victorian Buildings in Bristol: Bristol: 1975-: 66;
Gomme A, Jenner M and Little B: Bristol, An Architectural
History: Bristol: 1979-: 409; The Buildings of England:
Pevsner N: North Somerset and Bristol: London: 1958-: 426;
Country Life: London: 1971-: 412).