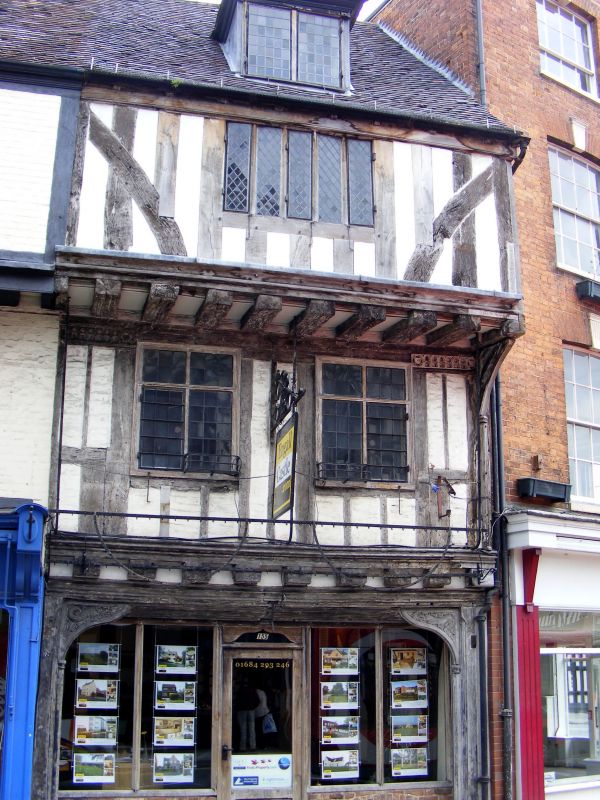 House in row, one of a pair, with shop. Late C15 or early C16.
Timber-frame with plaster panel or brick infill; close-studded
front with tension bracing.
PLAN: Parallel plan, built as pair with No.154 (qv) and with
shared central shared stack. A small single-depth property, on
a constricted site, double jettied, with one room at each
level, fireplace on the party wall, and staircase in outer
rear corner.
EXTERIOR: 3 storeys, attic and basement, 2-windowed. An early
hipped dormer with 2-light leaded casement, and with moulded
eaves, above two 2-light early leaded casements with transom
at first and second floors. A C20 shop front lies behind a
moulded bressumer with replaced spandrel brackets. The back
wall is partly concealed, but is in heavy framing with brick
nogging, and contains 2 very small leaded casements. The
second floor jetty joists are exposed, below a moulded
bressumer, and there is a deep moulded eaves board. The first
floor is partly in painted brickwork with some framing members
painted on. Large square C17 brick ridge stack shared with
No.154 (qv).
INTERIOR: retains much interesting fabric. The ground floor is
lined full height with glazed tiles, including a decorative
dado in blue tiles with various birds, and has a C19 cast-iron
spiral stair in the rear corner, to the first floor. There is
a large transverse chamfered beam near the back, and a small
light. The basement has a ceiling of stone slabs on cast-iron
angles or tees, and a concrete floor. A section of barrel
vaulting lies beneath the pavement, its full depth concealed
by inserted apparatus.
The first-floor room is fully lined with mid C18 fielded
panelling, but partly concealed by a large built-in cold room.
There are two 2-panel fielded doors, and, beside the chimney
breast, a similar cupboard door with splat-baluster ventilator
above. The fireplace is concealed by the insertion, but
evidence was produced of Jacobean carved work reputed to have
been removed from here. The upper floors are approached by a
tight open-well painted C18 staircase with solid string,
square newels, moulded handrail, and flat stick balusters;
this is all fitted to the acute angle of the rear corner.
The second-floor room, originally open to roof, has heavy
exposed framed and braced walls, and an C18 fire surround with
moulded mantel shelf. The windows have early glass, and
include a scratched 'Mary Logos 1738'. The attic has
wind-bracing to both slopes, and a small dormer at the back in
addition to the main front one.
A fine late medieval property which retains much fabric and
finishing of historic interest.