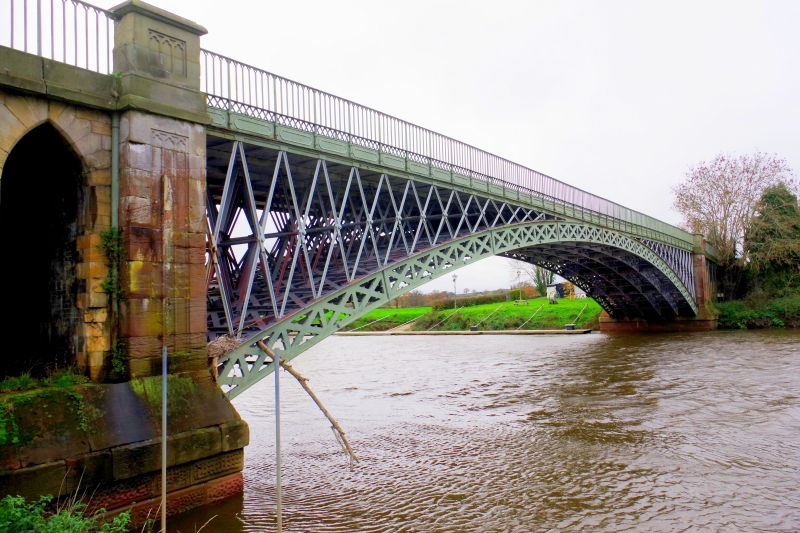 TEWKESBURY, A438,
THE MYTHE,
MYTHE BRIDGE

The Mythe Bridge designed by Thomas Telford and dating to 1825.

EXTERIOR: The bridge is built of cast iron with stone abutments. It consists of a single segmental arch with a 52m span resting on a series of six ribs with small X-bracing carrying the diagonal crossed bracing to the spandrels beneath the beam to the road way and balustrade. At each abutment is a series of six tunnel vaults with pointed arches, stone quoins and separated by attached colonnettes.

HISTORY: The Mythe Bridge was built in 1823-6 by Thomas Telford with the main iron casting by William Hazeldine, the celebrated Shrewsbury ironmaster. The bridge is illustrated on the first edition (1884) Ordnance Survey map with a toll house at both the east and west end. The form of the bridge remains constant throughout the historic maps although it is known that the decking was strengthened with a reinforced concrete slab in 1923.

REASONS FOR DESIGNATION
The Mythe Bridge built 1823-6 by Thomas Telford is listed at Grade II* for the following principal reasons:
* Technological interest: As a bridge of iron construction with a 52m span designed in the early 1820s, part of the first generation of this technologically significant type
* Engineering interest: As a significant bridge built by Thomas Telford.

The asset was previously listed twice also under the parish of Bushley as List entry 1238445. This entry was removed from the List on 03/07/2018.