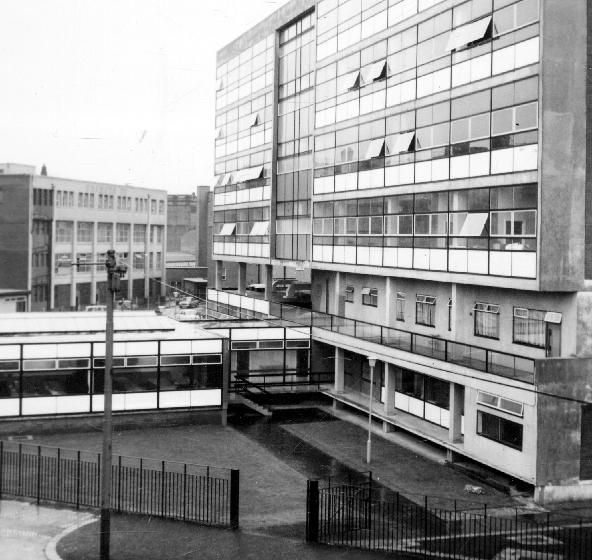 School, now college of further education. Late C19, altered.
Stock brick with dressings of red brick and sandstone (flat
roof concealed). Roughly T-shaped plan, formed by main block
parallel to street and large rear wing of almost full width.
Eclectic style with some C17 Renaissance features. Three
storeys and 5 bays (2 windows per bay), symmetrical, the
centre bay slightly projected, with red brick pilasters
(banded at top floor), moulded brick cornice interrupted in
the centre, high parapet with banded piers and iron railings,
interrupted in the centre by a rectangular upstand which has a
blind keyed oculus under an open pediment. Pairs of tall
casement cross-windows with small panes in the top lights,
square-headed at ground floor, segmental-headed at 1st floor,
and square-headed with segmental relieving arches at 2nd
floor. Some of the piers of the parapet are chimneys. Flat
roof which formerly served as school playground. Entrances at
the sides of the rear. Sides and rear have less regular
fenestration, including a gabled re-entrant in the centre of
the rear wall which has large tripartite windows, that at top
floor with a tympanum over the centre light. Interior not
inspected.