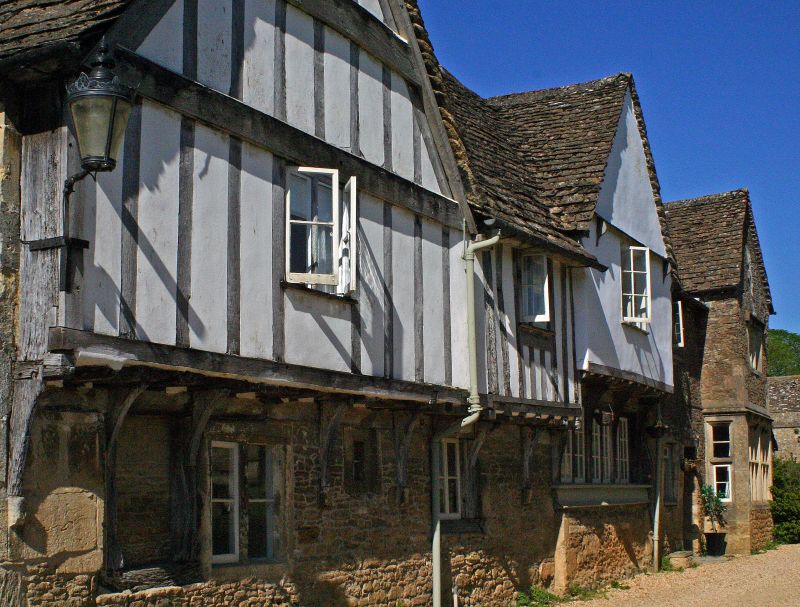 Range of houses, late medieval to C17, rubble stone and timber
frame with stone slate roofs. Two storeys. South front in 2
sections, to left, No 15, a continuously jettied timber-framed
first floor with large crosswing gable to left and ridge stack.
Casement pair to crosswing first floor, similar window to right.
Close studding, renewed on crosswing. Jetty originally on 10
curved brackets, now 9, springing from small corbels apart from 4,
originally 5, that are carried down as jambs for original windows.
One original 2-light on crosswing has left jamb and centre mullion
intact, but inserted stone mullion 2-light window to right
obliterates right half. Small original stone square light to
right, and a casement pair in frame of original single light. West
side wall of crosswing has 2-window range of cyma-moulded recessed
mullion windows to right, 2-light. above, 3-light below, then
chamfered Tudor-arched door to No 15 and later inserted door to No
14 to left with casement pair over. North end outside stack.
Single storey addition beyond. Parallel rear wing in timber-frame
and red brick with end stack. Right section of south front, No 16,
has 2 gables. To left, a crosswing with jettied roughcast upper
floor, the jetty on 4 curved brackets carried down as frames for 3
casement pair windows. Foot of a cruck truss exposed to right.
Main range has slightly higher ridge and projecting gable to right.
To left, a 3-light recessed chamfered mullion window with hoodmould
to first floor, C20 window and door below. Gable has similar upper
window with plaster decorated panels above and fine ground floor
full-width mullion-and-transom window of 3 plus 3 lights and single
lights to sides. Dripcourse over. End stack on roof-slope, lean-
to end wall garages.
Interior of No 16 is cruck-framed, 2 visible from ground floor.
Fine moulded Tudor-arched fireplace with stone shelf at west end.
Said to have C17 plastered ceiling upstairs. Interior of No 15 not
inspected. Used as parish workhouse 1766-1833.