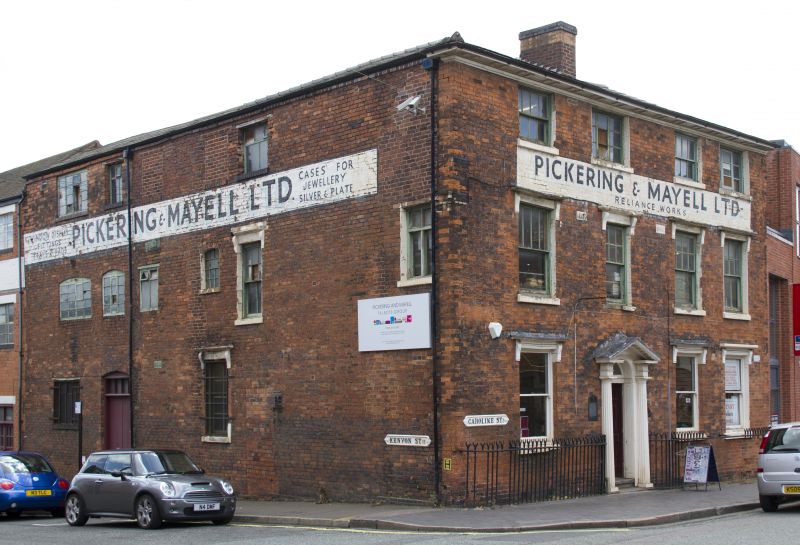 PLAN: Rectangular plan comprising a pair of former dwellings with workshop ranges extending to the rear.

EXTERIOR: Near-symmetrical three-storeyed frontage of four bays onto Caroline Street. The fenestration consists of revealed sash windows, some of which retain their glazing bars. The ground and first floor window openings have painted stone sills and reeded lintels flanked by shallow consoles to thin cornices over. The entrance is sited in the second bay from the left. The door case has engaged, slender, fluted Greek Doric columns which support an entablature and open bracketed pediment. There are plain reveals to the round-headed doorway and a six-panel door with a plain fanlight. A panel above the first floor windows reads `PICKERING & MAYELL LTD / RELIANCE WORKS'. The north return (Kenyon Street) of the attached workshop ranges which extend from the rear of both houses retain some original wooden-framed multi-pane windows.

SUBSIDIARY FEATURES: To the front (west) are cast-iron railings with crescent heads of distinctive Birmingham type.

HISTORY: The area around St Paul's Square to the north west of the city centre was developed as a residential and industrial zone from the 1820s and was eventually to become the Jewellery Quarter. The jewellery-case-making works of Pickering and Mayell Ltd, known as Reliance Works, was built in around 1826, originally as a pair of houses (Nos.41-42) with rear workshops. Early occupants included the noted Birmingham silversmiths George Unite and Nathaniel Mills. The company of Pickering and Mayell has occupied the premises since circa 1900.

REASON FOR DESIGNATION: 42 Caroline Street is designated at Grade II for the following principal reasons:
* Early-C19 dwellings with rear workshops that retains the distinctive architectural and plan form characteristics of a jewellery-manufactory building
* Strong group value with other listed jewellery manufactory buildings
* It exemplifies the early pattern of development of a manufacturing district of Birmingham now considered to be of international significance