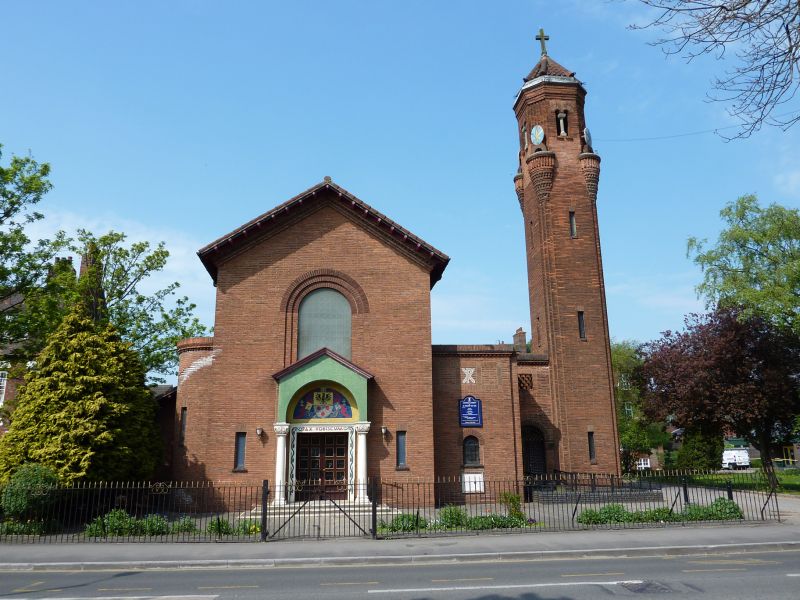 Roman Catholic Church. 1932. By Jopling & Wright. Brick with
brick dressings and pantile roofs. Romanesque style. Nave with
clerestorey and chancel under continuous roof, aisles with
internal chapels, porches, vestry, campanile to south-west.
Clerestorey has 7 round-headed windows on each side. Eastern
apse has dentillated eaves cornice and on either side, a
narrow flat-headed window. West end has a tall rebated
round-arched recess with a stained-glass window. Below it, a
shallow gabled porch with a pair of composite columns. Round
arched recess with a pair of panelled glazed doors with metal
grilles, and above the enriched lintel, a coat of arms in the
tympanum. Beyond, on either side, a small flat-headed window.
In the left return angle, a half-round stair turret with slit
windows.
South aisle, linked to campanile by coped porch, has cogged
eaves and coped parapet. Single window at the west end and 2
smaller windows at the east end. South side has 4 windows to
right of the campanile. Porch has to west a round-arched pair
of doors with a metal grilled overlight. Above it, a square
latticed window. North aisle has 5 windows to north and 2
small windows to east.
Vestry, to south-east, has a gable stack. South gable has a
round-arched recess with 2 windows, flanked by single windows.
East side has a Venetian window. West side has a moulded
round-arched doorway and to right, a single window.
Square campanile, 4 stages, has a single flat-headed window on
each side to the lower stages. Rebated corners with corbelled
turrets at the top of the third stage. Corniced octagonal bell
stage has ribbed corners and 4 double bell openings with
central shaft. Set back canted roof topped with a cross.
INTERIOR has moulded arches without piers to single bay
chancel and to half-domed apse. 5-bay arcades with round
ashlar piers and cushion capitals, and moulded brick round
arches with linked hoodmoulds. Painted sill band to
clerestorey. Painted waggon roof on corbels to nave and
chancel. West end has a rebated round arch containing the
organ and spanned by a bow-fronted gallery. Below, a central
pair of glazed doors, flanked by 3 glazed doors to the
confessionals.
Aisles have strutted lean-to roofs and windows with patterned
stained glass. South aisle has Lady Chapel to east, with altar
flanked by stained-glass windows, and a squint into the
chancel. To south-east, a round-arched doorway. Chapel of St
Vincent at west end has a wooden altar with figure and a
stained-glass war memorial window. North aisle has similar
Sacred Heart chapel to east, with altar flanked by
stained-glass windows.
Fittings include an eggcup font on a cruciform stand, panelled
wooden lectern and wooden benches with shaped ends.
(Buildings of England: Pevsner N: Yorkshire: York and The East
Riding: Harmondsworth: 1972-: 283; St Vincent's Church (Golden
Jubilee history): Norton, S: Hull: 1983-).