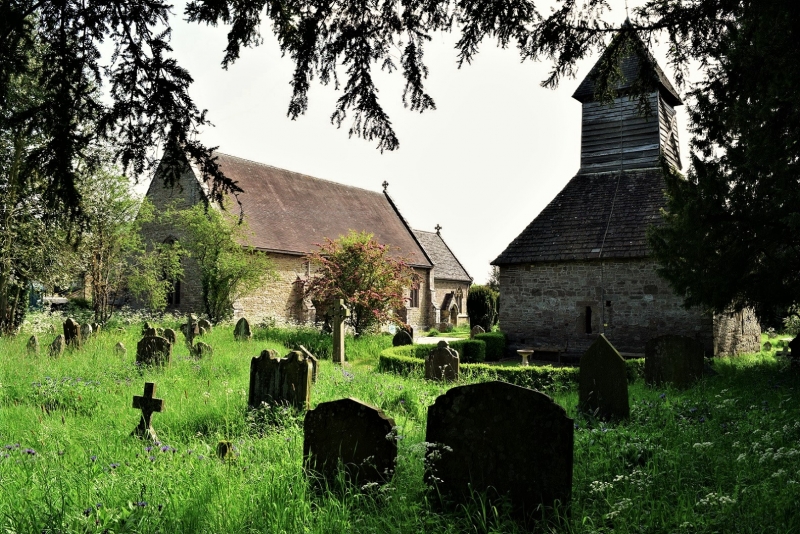 Parish church. Early C14, restored and extended 1864 by Sir G G Scott.
Coursed rubble with ashlar dressings and tile roofs. C14 nave and south
porch, C19 north aisle and chancel. Nave: south wall of four bays divided
by stepped buttresses with angle buttresses to the corners. Two eastern
bays have restored windows of two trefoiled lights with quatrefoil in head,
two-centred arch and labels with head stops. Bay to west of centre contains
south porch, mostly rebuilt in C19, with a C14 window of one ogee trefoil
light in each side wall. The south door has double chamfered jambs and a
two-centred arch. The westernmost bay is blind. The west window is of
three pointed lights under a two-centred head. North aisle: C19, with a
C14 window reset in west wall. Four windows in north wall, each of three
cinquefoiled lights under a square head. Chancel rebuilt in C19, of two
bays with diagonal corner buttresses. South wall western window blocked by
organ behind, eastern window of two trefoiled lights with tracery in head
below a two-centred arch. The priests' door between the windows has a gabled
porch, with a segmental pointed arch cinquefoil cusped. North wall contains
two similar windows. East window of three trefoiled lights with tracery in
head under two-centred arch. Interior: north arcade of nave of C19, four
bays with two-centred arches of two sunk-chamfered orders, piers of four
clustered columns with moulded capitals and bases. C14 chancel arch, two
centred and of two chamfered orders, the responds with moulded capital and
base. The restored label has head stops. Piscina in south wall of nave
has a trefoiled head and broken round drain. Piscina reset in south wall
of chancel has a moulded trefoil head and moulded gable above. Roof of
nave of five bays with C15 crown post trusses, common rafter couples have
collars with scissor-braces. Chancel roof of C19 in three bays. Arch-
braced collar trusses with pierced tracery in spandrels. The wind-braces
form quatrefoils. Fittings: the font probably C13 with octagonal bowl,
the splayed lower part having segmental moulded arches, on a C19 stem and
base. (RCHM, 3, p 215; BoE, p 327).