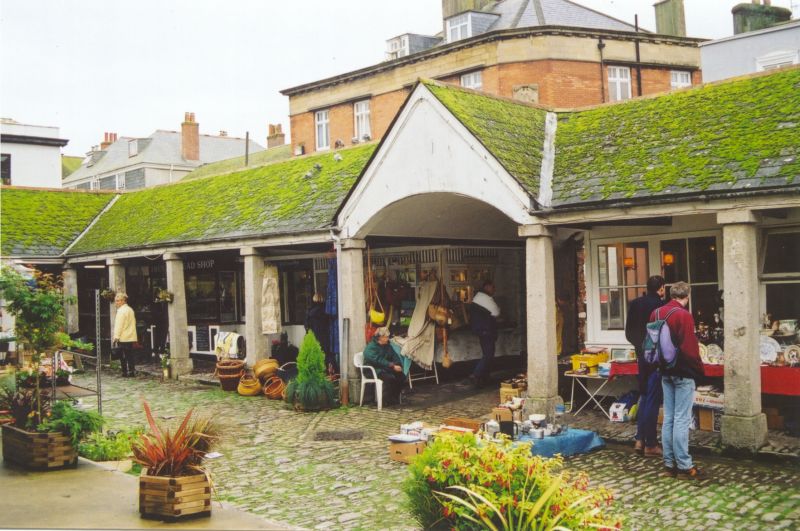 Pannier market. 1828; renovated c1975. Brown-coloured local
sandstone rubble, granite arcades; stone lateral stacks with
relatively tall diagonal red brick chimneyshafts; slate roof.
PLAN: Cobbled market square, which contains Market Court House
(qv), enclosed on 4 sides by market buildings, square on plan.
Carriageways through north and south sides, another blocked on
west side. Single-storey stalls face into the courtyard
backing onto outer walls.
EXTERIOR: From the outside there are long low ranges, the
walls with blind rectangular panels; roofs hipped on the
corners. Original carriageway in centre of south wall (onto
Victoria Road) has segmental arch with gable over and contains
original double gates, curving down to centre with iron spiked
crest and diagonal plank panels. To right, the one window this
side has a reused C17 timber mullion-and-transomed frame. West
side includes some secondary lockups and the gabled
carriageway this side has been so converted.
Inside, each side had an open 9-bay arcade carried on tapering
granite posts with plain plinths and caps. It is still open on
south side where, each side of the carriageway, there are
still early stalls; the one east of the carriageway, for
instance, has butcher's hooks and ventilation grille. East and
west arcades totally blocked and north side partly blocked.
INTERIOR: Most now ceiled, but part of north side open to
original tie-beam trusses with lap-jointed collars and raking
queen struts, all fixed by wooden pegs.
HISTORY: The Market Square was the focus for an extensive
scheme of improvements associated with the infill of the old
mill pool. This work supervised by the Rev.Charles Holdsworth
using family money, the interest to be paid out of the borough
income. At the same time, New Road (now Victoria Road) was
built along the southern edge of the creek to enable, for the
first time, horse-drawn traffic in and out of the town.
(Freeman, Ray: Dartmouth and its Neighbours: Phillimore:
1990-: P.146).